Youth and Work in Massachusetts

For a young adult just out of school, finding that first job has never been easy. Unfortunately, over the past ten years finding that first job has gotten harder. A job market in which more jobs require advanced training, coupled with the lingering effects of the recent deep recession have produced even greater employment obstacles to the young.1 Recent education statistics from the state show that while high school dropout rates are declining, low-income youth or those with limited English proficiency or disabilities are less likely to graduate than other young people. In fact, the number of young adults who are neither in school nor working (so-called "disconnected youth") is growing. This population presents a particular challenge to the state's economy, as those young adults are at greater risk for longer-term unemployment and social dislocation.

In 2011, 13.8 percent or close to one in seven young adults (ages 16-24) in Massachusetts are unemployed.2 This is a dramatic increase—more than doubling—of the youth unemployment rate in 2000, which was 6.7 percent, or one in fifteen. 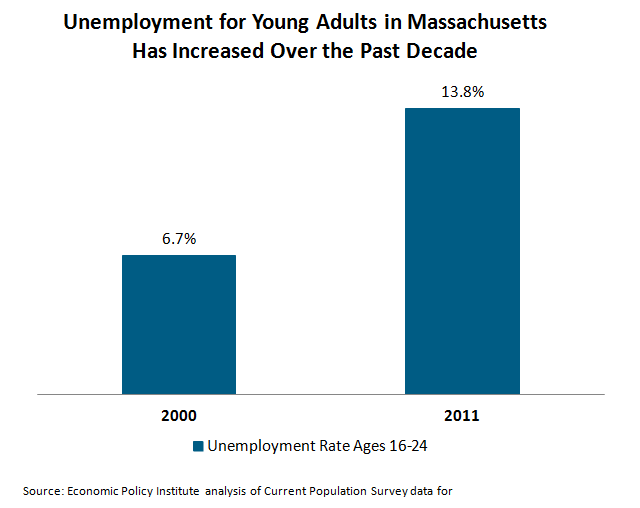 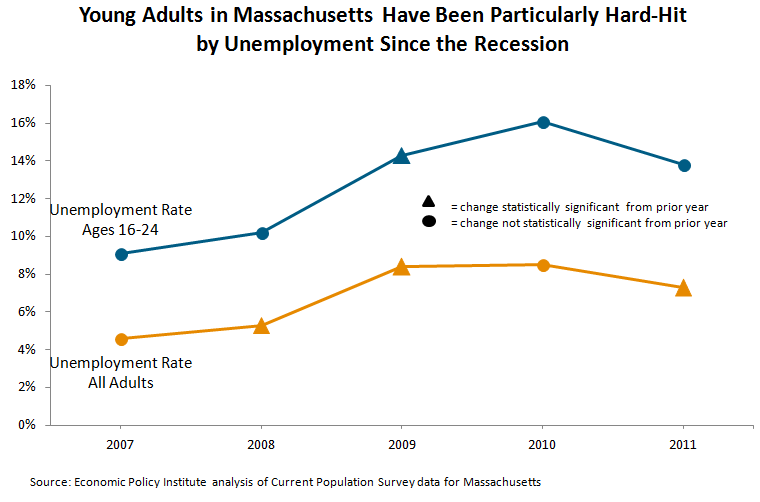 Another way to think about employment is to look at the employment to population ratio. This statistic emphasizes the share of a total population (for example, young adults ages 16-24) who are employed. Not all of these young adults are wishing to be employed of course, some are in school full time, some are at home raising children, and others may be out of the labor force intentionally for other reasons. 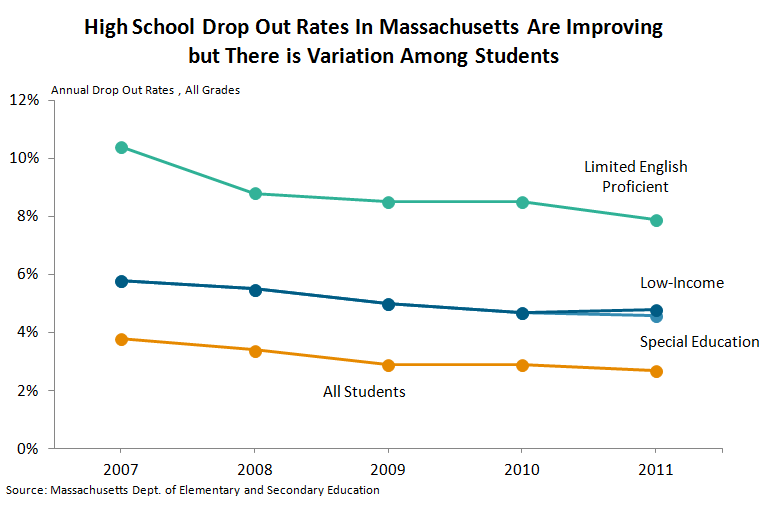 DISCONNECTED YOUTH—OUT OF WORK AND OUT OF SCHOOL

All-in-all, young adults who are not high school graduates are far less likely to find employment when jobs are relatively scarce. A recent analysis of Census data conducted by the Annie E. Casey Foundation found that in Massachusetts, close to 134,000 young adults in 2011 are neither in school, nor working. Of these, 50,000 are between 16-19 years old.5 This is an increase from an estimated 92,000 young adults out of school and out of work in 2000. Although there may be many reasons why a young person is neither in school nor working, these young adults are particularly vulnerable to longer term unemployment, and are at risk for lower long term career achievement. 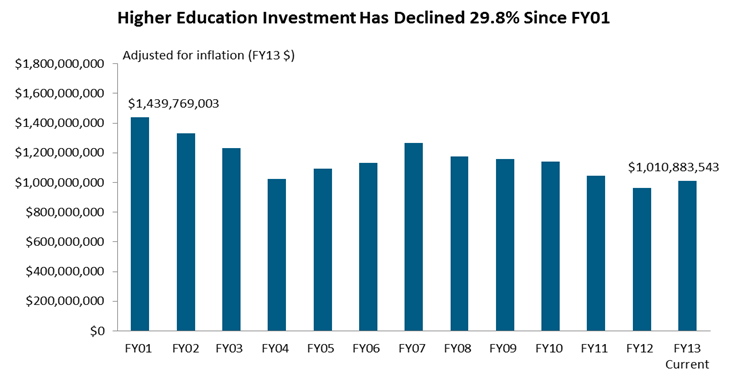 In looking at funding over the last decade (see following table), we see that youth services funding increased between FY 2004 and FY 2007 and remains greater than it was before that time. There were cuts to these programs during the early years of our economic crisis, but FY 2012 saw increases above any previous funding level. The FY 2012 increase can be attributed to the Youth Violence Prevention Grants and an increase in the YouthWorks program. In FY 2013 funding for many of these programs were cut from 2012 levels. However, the FY 2013 numbers should be viewed as tentative as some of the funding for these programs generally comes in supplemental funding the state allocates throughout the fiscal year. There is a significant danger, however, that due to the Commonwealth's fiscal challenges this year the funding levels for these programs will not be increased from where they are—and possibly could be decreased. 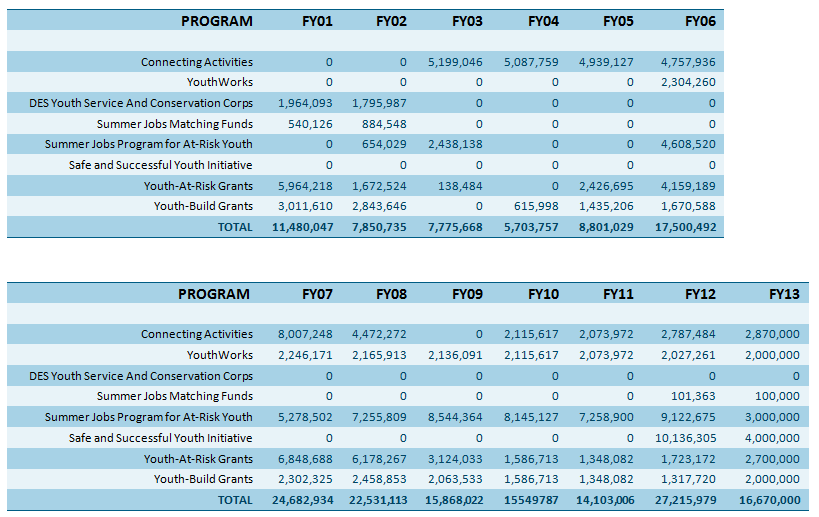 1 For a discussion on national employment trends for young adults, see Annie E. Casey Foundation, "Youth and Work: Restoring Teen and Young Adult Connections to Opportunity", December 3, 2012, for which this brief is a companion piece.

3 From an analysis by the Population Reference Bureau of Current Population Survey, U.S. Census Bureau and Bureau of Labor Statistics for the Annie E. Casey Foundation, "Youth and Work: Restoring Teen and Young Adult Connections to Opportunity", December 3, 2012.

4 Data from the Mass. Department of Elementary and Secondary Education is available here. In 2011 the four year overall graduation rate for students entering in 2007 was 83 percent, with lower rates for low-income students, students with disabilities and students with limited English language proficiency. For district-by-district 2011 graduation rates, see the Mass. KIDS COUNT data center.

5 From an analysis by the Population Reference Bureau of Current Population Survey, U.S. Census Bureau and Bureau of Labor Statistics for the Annie E. Casey Foundation, "Youth and Work: Restoring Teen and Young Adult Connections to Opportunity", December 3, 2012.

6 Data from the final budget appropriations by the Massachusetts Legislature Fiscal Years 2001-2013. Inflation adjusted by the Consumer Price Index.

7 Data from the Massachusetts Legislature Fiscal Years 2001-2013 and data provided by the Commonwealth Corporation. Inflation adjusted by the Consumer Price Index.