The Minimum Wage and Job Creation

This fact sheet is part of a series of MassBudget reports addressing various aspects of the Massachusetts minimum wage.

For many years the Massachusetts minimum wage was the same as, or close to, the federal minimum wage level. Legislation passed in 1995 increased the state's hourly minimum wage from $4.25 to $4.75 starting in January, 1996 and to $5.25 in January, 1997, slightly ahead of increases in the federal minimum wage. Two sets of subsequent increases followed during the next decade—to $6.00 and $6.75 in 2000 and 2001, and to $7.50 and $8.00 in 2007 and 2008. Figure 1 shows the change in employment levels for all industry sectors and for sectors with high and low concentrations of minimum wage workers from January 1995 to January 2012.1 During the first part of this period, in the 1990s, all sectors—including those with a high concentration of minimum wage workers—experienced roughly similar growth levels, despite implementation of a higher minimum wage.

The minimum wage increases that went into effect in 2000-01 were followed by a slight dip in employment levels for sectors with higher concentrations of minimum wage workers, and a deeper dip followed the phase-in of the 2007-08 increase. However, sectors with low concentrations of minimum wage workers experienced much deeper declines during these periods. The declines in both sets of sectors were at least partly the result of recessions that began in March of 2001 and December of 2007, but by January, 2012 the low wage job sector had recovered the jobs lost during the recession, in contrast to other sectors. This experience suggests that the six increases in the minimum wage have not impeded growth in jobs for minimum wage workers. In fact, a recent analysis of the effects of a potential increase in the national minimum wage to $9.80 suggests that such an increase could help stimulate the local economy.2 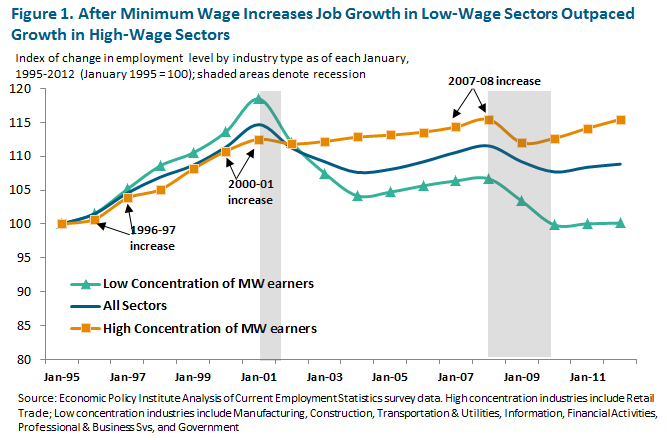 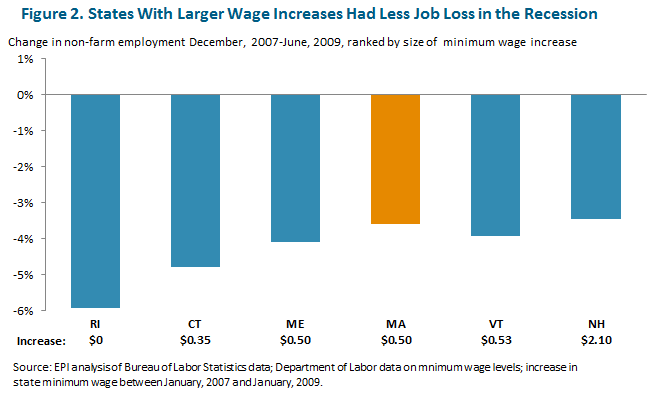 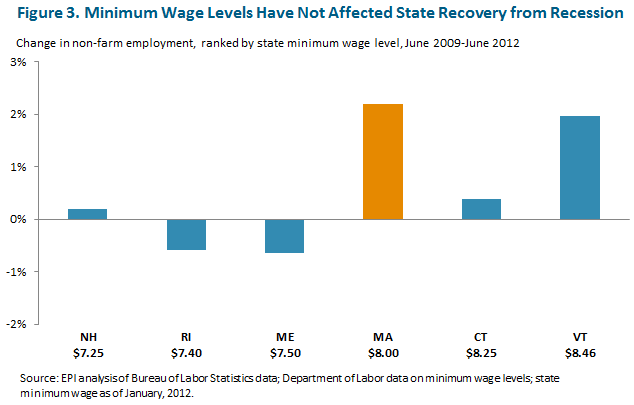 The experience in Massachusetts described above is echoed in the results of the most recent major academic studies looking at whether minimum wage increases result in job loss. Attempts to answer this question have occupied economists in recent decades, particularly as states began to increase their minimum wages beyond the federal levels the 1990s. A number of studies during this period produced conflicting results—some suggested that minimum wage increases had no effect, while others found small negative effects (see summaries in Appendix B).

There are a number of reasons why these studies do not find a negative impact on employment. One explanation is that raising wages may reduce employee turnover, and thus reduce the costs employers incur when they must hire and train new workers. Higher wages may also lead to improved morale and increased productivity, and employers may be able to pass on a portion of the costs of the increase to consumers or otherwise absorb it.5

While there are many small businesses in Massachusetts, they account for a relatively small number of jobs. In 2009 (the most recent year for which data are available), around 119,000 firms, or 86 percent of Massachusetts businesses, had fewer than 20 workers.6 At the same time, only 17 percent of workers are employed in businesses with fewer than 20 employees, and more than two-thirds of workers in Massachusetts are employed in businesses with 100 or more employees. While some small businesses—for instance, small restaurants or stores—may pay minimum wage rates, others, such as small law or architecture firms and construction businesses, are likely to pay well above the minimum wage.

Nevertheless, it is worth considering the potential impact of a minimum wage increase on small businesses, since some of them may be less able to easily absorb changes in the price of labor. Studies of the effect of minimum wage increases, such as those discussed above have typically not addressed differences in effect among small and large employers. One analysis that did focus on small employers (published in 2004, and then updated in 2006) compared states with minimum wages above the federal level to those with wages at the federal level, and found that the group with higher minimum wages had faster rates of small business growth (small businesses are defined in this study as establishments with fewer than 50 employees).7 As noted above, a variety of factors can influence job growth in a particular state, but this study suggests that minimum wage increases are unlikely to have a negative economic impact on small businesses in the long term.

Dozens of studies of the effect of minimum wage increases on employment have appeared since the early 1990s. The following list includes key articles by two sets of scholars on opposite sides of the debate, David Neumark and William Wascher (who argue that minimum wage increases have negative effects) and David Card and Alan Krueger (who argue that they do not have negative effects). This works forms a backdrop for the two studies described in this fact sheet.

David Neumark and William Wascher, "Minimum Wages and Employment," Foundations and Trends in Microeconomics 3: 1-2 (2007): 1-182.
Reviews the research literature on the employment effects of the minimum wage from the early 1990s on and suggests that while there is a wide range of existing estimates the majority of studies point to a negative (although not always significant) effect. Further suggests that studies that focus on groups with lowest skills provides stronger evidence of a negative effect on employment for these groups.

David Neumark and William Wascher, "Minimum Wages and Employment: A Case Study of the Fast-Food Industry in New Jersey and Pennsylvania: Comment," 1362-96. This study examines the effect of an increase in the New Jersey minimum wage in order to reevaluate the conclusion of the 1994 study by Card and Krueger that found no negative effect on employment levels. Using data from administrative payroll records from a sample of large fast food restaurants, instead of the employer survey data used in the 1994 study (which the authors consider flawed), they find that the minimum wage increase led to a significant decline in fast-food employment.

David Card and Alan M. Krueger, "Minimum Wages and Employment: A Case Study of the Fast-Food Industry in New Jersey and Pennsylvania: Reply," 1397-420.
Like a 1994 study by the same authors, this article analyzes the effect of an increase in the New Jersey minimum wage on employment, but in response to Neumark and Wascher's criticisms of their methodology (in the article above), it uses data reported by employers to the Bureau of Labor Statistics rather than the survey data used in the earlier study. The article again finds no evidence that the minimum wage increase had a significant effect on employment, and some evidence for a small, but insignificant, positive effect. The authors suggest the negative effect of an increase found by Neumark and Wascher is the consequence of a failure to adjust for reporting differences that led to a less representative data sample.

David Card and Alan Krueger, "Minimum Wages and Employment: A Case Study of the Fast-Food Industry in New Jersey and Pennsylvania," American Economic Review 84:4 (1994): 772-793.
This paper analyzes the effect of an increase in the New Jersey minimum wage on employment, wages, and prices, using data from a survey of fast food restaurants in New Jersey and eastern Pennsylvania (where the minimum wage did not rise). It finds a small increase in employment in New Jersey, and some evidence that some costs were passed on to consumers in the form of higher prices for meals.

These three articles appeared in the Industrial and Labor Relations Review, 46, No. 1 (October 1992).

Card, David. 1992. "Using Regional Variation in Wages to Measure the Effects of the Federal Minimum Wage," 22-37.
Card examines the effect of a 1990 increase in the federal minimum wages on teen wages and employment, using differences in incremental wage increases due to variation in state minimum wages at the time of the federal increase. He finds that the increase in the minimum wage raised wages for teens, but did not lead to a significant drop in teen employment rates.

Lawrence F. Katz and Alan B. Krueger, "The Effect of the Minimum Wage on the Fast Food Industry," 6-21.
The authors examine increases in the federal minimum wage on fast-food restaurants in Texas, using longitudinal survey data, and find that employment increased at employers most affected by the minimum wage increase.

David Neumark and William Wascher, "Employment Effects of Minimum and Subminimum Wages: Panel Data on State Minimum Wage Laws," 55-81.
Neumark and Wascher analyze data on minimum wages and local economic conditions for all states for the period 1977-89 (and 1973-89 for a subset of states) and find that increases in the minimum wage have a small negative effect on employment among teenagers and young adults.

2Doug Hall and David Cooper, "How Raising the Minimum Wage Help Working Families and Give the Economy a Boost" (Economic Policy Institute, August 2012).

5See "Big Business, Corporate Profits, and the Minimum Wage," a recent report by the National Employment Law Project showing that on a national level two-thirds of low-wage workers, including minimum wage workers, are employed by corporations with over 100 employees, and that the majority of these businesses have seen increases in profits and executive pay following the recession. (http://www.nelp.org/page/-/rtmw/NELP-Big-Business-Corporate-Profits-Minimum-Wage.pdf?nocdn=1)