Egerman and Berger:
Education is the path to prosperity [Op-Ed]

This op-ed first appeared in the MetroWest Daily News

These findings are confirmed by a recent analysis, A Well-Educated Workforce is Key to State Prosperity, released by the Economic Policy Institute.  In the 22 states with the least well-educated workforces, median wages hover around $15 an hour, the only exceptions being Alaska and Wyoming.  In the three states where more than 40 percent of the population has a bachelor's or more education, median wages are $19 to $20 an hour, nearly a third higher. 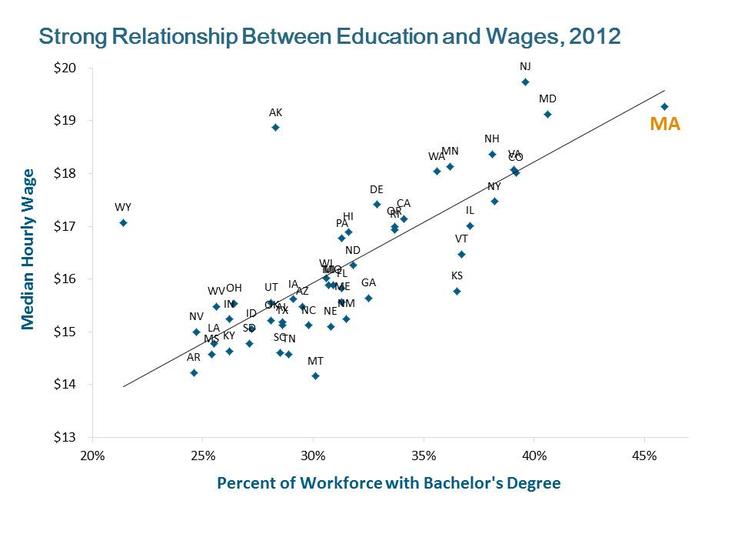 To anyone who has built a high wage business in the modern economy, this is obvious. One of the authors of this op-ed has built two very successful businesses here in Massachusetts, including eScription, Inc., co-founded in Needham. The success of these businesses is based largely on the skills of the people of Massachusetts.  In Massachusetts we have the best educated workforce in America, with 46 percent of our workers having a four-year college degree. That means that when I am building a business that relies on well-educated, highly skilled employees to make it successful, I gain tremendous value from being in Massachusetts. As state governments think about what it takes to nurture and attract high wage employers they shouldn't forget the obvious: we need well educated workers.

While Massachusetts leads the nation in the share of our workforce with a college degree—at 46 percent—that shouldn't make us complacent. It means that more than half of our people don't have that level of education.  We need policies that directly help those less educated workers by providing needed support and setting the kinds of minimum wage standards that make it possible for all of our working people to be able to support themselves and their families.

But if we want to build the strongest possible economy in the long run, we should consider what it would mean if we could increase that percentage of four-year college graduates from 46 percent to 56 percent, or even to 66 percent or 76 percent. If we could achieve that, we would almost surely have an economy far stronger than what we have today.

What would it take to get there?  For starters it would require a sharp focus on how to help those young people who are now not on the path to college. Roughly four out of every 10 Massachusetts third graders are not proficient readers. The research is compelling that preparing kids to read by third grade is critical if those young people are going to succeed on school. From their early years through third grade we need to provide kids with high quality, focused and coordinated reading instruction. But we can't stop there. All of our kids need the opportunity to have access to high quality education through elementary school and high school - and in public colleges and universities with affordable tuition.

To succeed in school, many of our young people need to overcome challenges outside of the classroom as well—and they often need help to do so. They may be, or be close to being, homeless, or hungry, or in foster care, or they may be held back by physical or mental health issues. If we are to make a serious commitment to supporting all of our children in reaching their full potential, we need to make the up-front investments in education and the supports that can provide all of our children an opportunity to succeed.  Those investments require tax revenue, but making these investments in the next generation is the right thing to do. And in the long run it's the best thing we can do to build a strong, high wage economy here in Massachusetts.

Paul Egerman of Weston is co-founder and former CEO of eScription, Inc., the pioneer and leader in Computer Aided Medical Transcription. Formerly, Mr. Egerman co-founded IDX and grew the company from a start-up to a publicly held corporation with over 2,000 employees and more than $250 million in sales.

Noah Berger is president of the Massachusetts Budget and Policy Center and co-author of the recent paper "A Well-Educated Workforce is Key to State Prosperity."