Effects of Raising Rates and Exemptions on the State Income Tax

This Facts At A Glance updates MassBudget's analysis of a reform option that would make changes to the way the Commonwealth taxes wage and salary income as well as investment income. The Department of Revenue (DOR) recently examined this reform option and estimated that the proposal's combined changes would generate between $1.99 billion and $2.11 billion (middle of range = $2.05 billion) in new revenues in its first full year after implementation.1 This Facts At A Glance describes DOR's revenue estimates and also provides an analysis from the Institute on Taxation and Economic Policy showing how people at different income levels would be affected by the changes. Additionally, it looks at the proposed changes in the broader context of our state's current tax system and recent federal tax policy choices.

The reform proposal would change the following two kinds of state income taxes:

The proposal would raise the tax rate applied to wage and salary income from the current 5.25 percent to 5.95 percent. Along with this change, the proposal would increase the personal exemption amount from the current $4,400 (single filer)/$6,800 (head of household)/$8,800 (married filing jointly) to $7,900 (S)/$10,300 (HH)/$15,800 (MFJ). This change in the value of the personal exemption would automatically reduce the amount of each filer's income that is subject to state income tax, thereby reducing the impact of the proposed rate increase. For many low and moderate income filers the combined effect of these changes would be a modest reduction (or no change) in their income tax bills. For higher income filers the benefits of the higher personal exemption amount would not fully offset the effects of the higher tax rate and these filers would pay more income taxes under the plan than they currently do.

The proposal also sets a single tax rate of 8.95 percent on all forms of investment income, including capital gains, dividends and interest. For most investment income, this would represent an increase from the current rate of 5.25 percent.2 In combination with this rate increase, the bill proposes establishing a new personal exemption, applicable only to investment income. This personal exemption would be available only to seniors and disabled persons with incomes of less than $40,000 (single)/$80,000 (married filing jointly).3 When this exemption is taken into account, qualifying filers would pay an effective tax rate of about 5.95 percent (similar to the rate on wage and salary income) on the first $7,500 (single)/$15,000 (married filing jointly) of investment income rather than the 8.95 percent rate.

In making its revenue impact estimates, DOR applied the above changes to its 2010 tax year filing data to see how these changes would have altered tax collections in 2010. DOR then used projections of income growth from 2010 into future years to "grow" their 2010-based estimates in order to better reflect the likely revenue impact of these changes in 2013 and beyond. Using this approach, DOR estimates that the tax rate increase on wage and salary income would generate an additional $1.55 billion in 2014, while the rate changes on investment income would generate an additional $1.34 million,4 for a total of some $2.89 billion in new revenue.

These revenue gains would be offset, in part, by revenue reductions resulting from the proposed changes to personal exemptions. DOR estimates that the increase in the personal exemption amount for wage and salary income would reduce collections by $804 million in 2014, while the creation of a personal exemption for investment income for low and moderate income seniors and disabled persons would reduce collections by $33 million. When the revenue gains and losses are totaled, DOR estimates a net revenue increase of about $2.05 billion in 2014.

Effects of the Proposed Changes, By Income Group

By collecting more tax from the state's high income residents while also providing small tax reductions for many low and moderate income households, the reform proposal would reduce, somewhat, the current regressivity of the tax system. Even with the proposed changes, however, high income households still would pay a substantially smaller share of their income in state and local taxes (from 7.2 percent to 8.6 percent) than would other Massachusetts families. 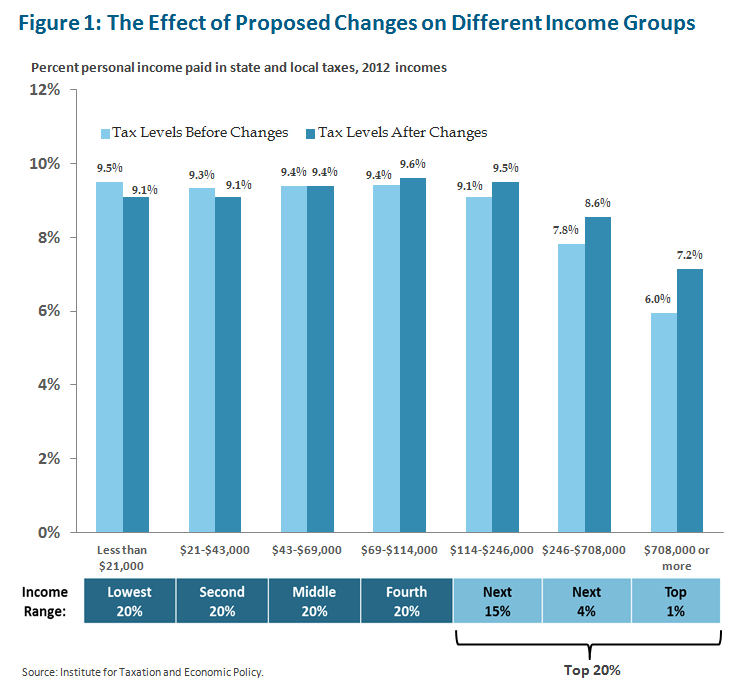 Under the proposed reforms, changes in the dollar amount of taxes owed by households in different income groups would vary substantially (see Figure 2). 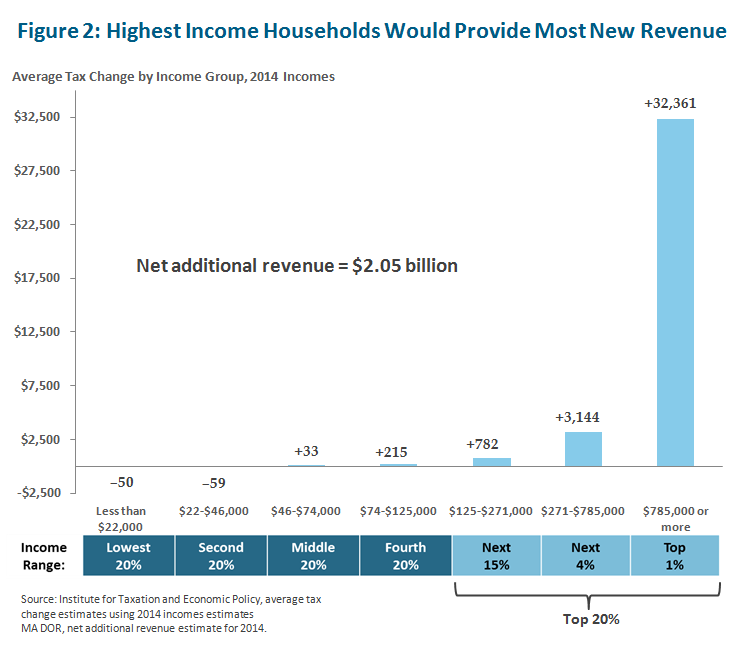 The combined set of changes would result in modest tax decreases (or no change), on average, for many low and moderate income households. Households with the highest one percent of all incomes in Massachusetts would see average increases in their annual tax liability of around $32,000.6 Other households with high income—but incomes which nevertheless fall below the incomes of the top one percent—also would see tax increases, though the average increases would be substantially smaller than for the top one percent. Likewise, some middle income households would see modest increases.

Interaction of Tax Rates with Exemptions and Deductions

In general, the amount of income tax one owes is a function of the tax rate and the amount of taxable income to which that rate is applied. Taxable income is determined by adjusting a filer's gross income (the amount most of us think of as our "wages", "salary" or "pre-tax earnings") downward according to the value of the exemptions and deductions for which the filer is eligible. Thus, while raising rates will increase taxes on a set amount of taxable income, raising the value of an exemption or deduction will decrease the amount of gross income that is subject to taxation, thereby reducing a filer's tax liability.

Of course, most filers also are eligible for various other exemptions and deductions that allow their gross incomes to be higher while their taxable incomes remain below the $26,250 (S) and $52,500 (MFJ) thresholds. The table below lists some of the Commonwealth's major exemptions and deductions. To determine the threshold at which a particular taxpayer's gross wage and salary income would result in a tax increase, the additional exemption and deduction amounts listed below can be added to the income amounts shown in the table's "Gross Income" row. A taxpayer whose actual gross income exceeds the threshold gross income calculated from the table below would see a tax increase of $7.00 for each $1,000 of income above the threshold (assuming a rate increase from 5.25 percent to 5.95 percent).

Effect of Federal Deduction for State and Local Taxes Paid

The average state tax increase estimates shown in Figure 2 do not include the reductions in federal taxes that Massachusetts households would receive as a result of any increase in their state tax liability. Called the "federal offset", federal tax law allows filers to deduct their state-level income taxes from the income total on which the filer must pay federal taxes. The effect of this deduction is to reduce the federal tax liability of filers paying state-level income taxes. Effectively, this reduction in federal taxes "offsets" a portion of these filers state tax costs, decreasing the net cost to filers who would pay more state taxes as a result of the tax code changes outlined above.

The value of each filer's offset depends on the amount of state taxes the filer has paid; the filer's federal tax bracket; and the share of the filer's income derived from wages and salary vs. investment income. For filers that have paid state income taxes, their federal offset typically would be equal to somewhere between one-sixth and one-third of his or her state income tax costs.9

The data underlying this analysis can be downloaded as a spreadsheet.

2 Short term capital gains (i.e., gains on investments held one year or less) are currently taxed at 12 percent by the Commonwealth, so the 8.95 percent rate would represent a reduction in the tax rate applied to this type of income. The bill would leave in place the current preferential rate of 3 percent applied to short term capital gains income derived from investments in new, Massachusetts-based small businesses, with capitalization of less than $50 million.

3 The great majority of investment income in Massachusetts (and nationally) goes to households in the top 5 percent of the income distribution (see US Census, Statistics of Income data). Of those lower and moderate income households with any sizeable amount of taxable investment income, many are seniors, spending down their retirement savings.

5 Distributional analysis provided to MassBudget (February 2013) by the Institute on Taxation and Economic Policy (ITEP) using current 2012 income data. DOR's net revenue estimate, by contrast, is for 2014, using projections for Massachusetts incomes and economic factors in 2014. ITEP's distributional analysis of the tax changes presented in this factsheet, like DOR's, also is based on 2014 income estimates. See MassBudget factsheet on tax fairness: http://www.massbudget.org/documentsearch/findDocument?doc_id=750