Income Tax Cuts and the Budget Deficit in Massachusetts

The state budget, and the taxes that fund it, are the primary way we pay for the things that we do together through government. These include things like police and fire protection; public education; roads, bridges and public transportation; a safety net for when people face hard times; and more.

In the period from 1998 through 2002, a number of significant changes to the state tax code were adopted, including a series of phased cuts to the state personal income tax. These cuts played a major role in reducing the revenue available to fund the state budget, and as a consequence severely limited the capacity to fund essential services in the Commonwealth. 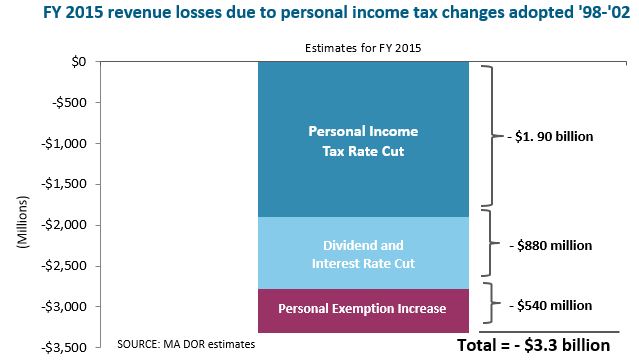 Other factors also have affected state revenue collections in the years since 1998. These include state-level tax policy decisions, as well as changes in consumer spending patterns and in the structure of the Massachusetts economy.

While there have been several tax increases over this period - including increases to the state sales tax and gas tax, among others - the net effect of all increases and reductions since 1998 (combined with other factors affecting state tax revenues) is that total tax revenue as a share of state personal income has declined by one percentage point (from 6.3 percent in FY 1998 to 5.3 percent in FY 2014). This amounted to a loss of $3.5 billion in annual tax revenue for the Commonwealth in FY 2014. 1 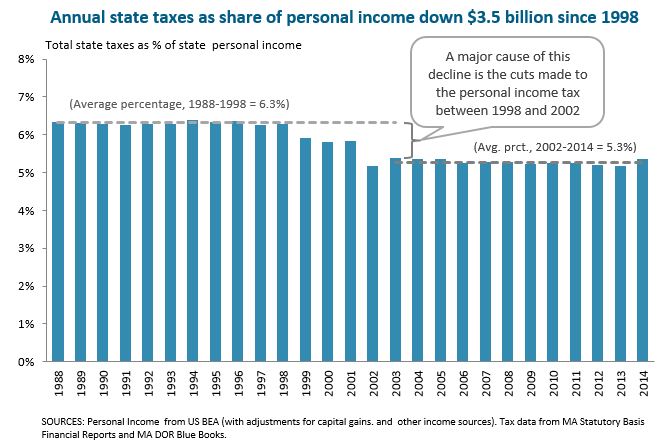 This substantial decline in revenue has produced an ongoing fiscal crisis for the Commonwealth - and severe shortfalls during economic downturns. In response to these budget shortfalls, state lawmakers have made deep cuts to program areas across the budget (see chart, below). Deep cuts in funding for essential public investments can compromise the state's long term growth potential and harm the current and future well-being of the people who live and work here in Massachusetts. 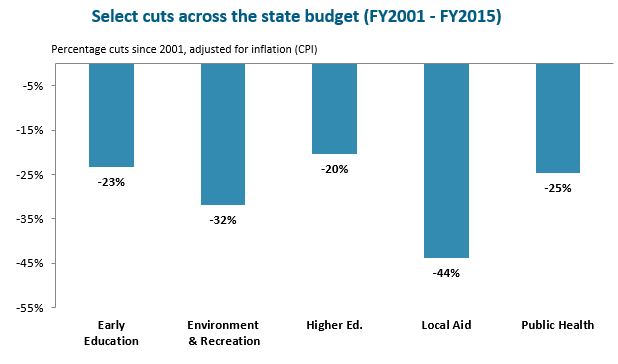