Taxes are the primary way we pay for the things that we do together through government. These include things like police and fire protection; public education; roads, bridges and public transportation; a safety net for when people face hard times; and more. Determining how much people at different income levels pay in taxes is important when considering the fairness of tax policy changes. While most taxes in Massachusetts have a fixed rate—for example, the state has a flat 5.25 percent income tax—different income groups are affected differently by each tax. These differences can be explained in terms of regressivity and progressivity—how taxes vary by income level.

A tax is proportional (or "flat") if the same tax rate is applied to all income levels. A flat income tax, with no deductions or exemptions, would collect the same proportion of each filer's income, regardless of income level.

A tax is progressive if the share of income people pay in that tax increases as their income rises. Progressive taxes shift taxes away from those with the least ability to pay and onto people with higher incomes.

A tax is regressive if the share of income paid in that tax increases as income declines. Regressive taxes ask those with the least to contribute the most as a share of their income.

A tax system typically is composed of a variety of different types of taxes. Usually, the system will include some taxes that are progressive and some that are regressive. Regressive taxes sometimes meet other criteria of a good tax, such as enhancing stability of the overall tax system, and thus may be a valuable part of the overall system. When considering progressivity and regressivity, it therefore is important to examine not just individual taxes, but rather the overall tax system in a state.

As the chart below shows, overall, the Massachusetts tax system is regressive, collecting a larger share of household income from lower-income households than it does from upper-income households. This is primarily due to the property tax and the sales tax, each of which has the effect of taxing lower-income people at significantly higher rates than higher income people. (For more information on the property tax, see the property tax chapter of MassBudget's tax primer. For more information on the sales tax see MassBudget's Sales Tax Fact Sheet.) 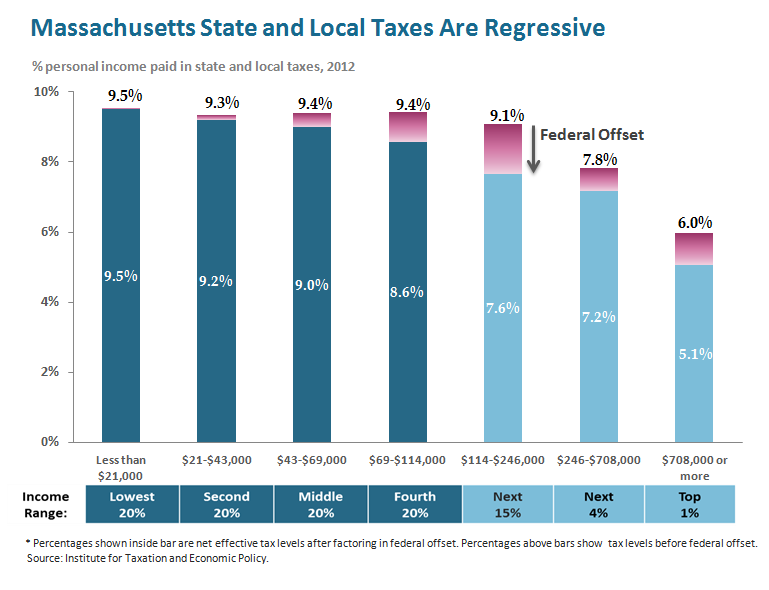 The state system is even more regressive if we take into account the effect of the "federal offset," which allows taxpayers to deduct their state income taxes when calculating their federal taxable income. This deduction reduces the federal tax liability of filers paying state-level income taxes (for more, see MassBudget's Tax Primer.)

The value of the deduction depends on the amount of state-level income tax a filer has paid; the mix of income a filer reports (investment vs. wage and salary income); and the top marginal rate at which a filer pays federal taxes. For high-income filers who are paying federal taxes at the 39.6 percent rate on a portion of their income, this deduction can be very valuable. For most low and moderate income households, however, this deduction provides little if any benefit (see chart, above).

The data underlying this analysis can be downloaded as a spreadsheet.