Massachusetts Ranks in Middle for Taxes in FY 2011

The U.S. Census Bureau has released its annual update of State and Local Government Finances, providing national data for Fiscal Year 2011. The amount of state and local taxes paid in Massachusetts as a share of total personal income was 10.37 percent in FY 2011. By this measure, Massachusetts had lower taxes than 20 other states and was below the national average of 10.56 percent (see Figure 1).1 Measuring taxes as a share of total personal income allows for a meaningful comparison among states (see "Technical Notes" at the end of this document).

Taxes are the amount that we all pay toward—and the primary source of funding for—everything the people of a state choose to provide together through government, such as: public education; police and fire protection; roads, bridges and other infrastructure; environmental protection, parks, playgrounds, libraries; and a safety net to protect access to health care and other supports families depend on—particularly when they are faced with acute challenges. 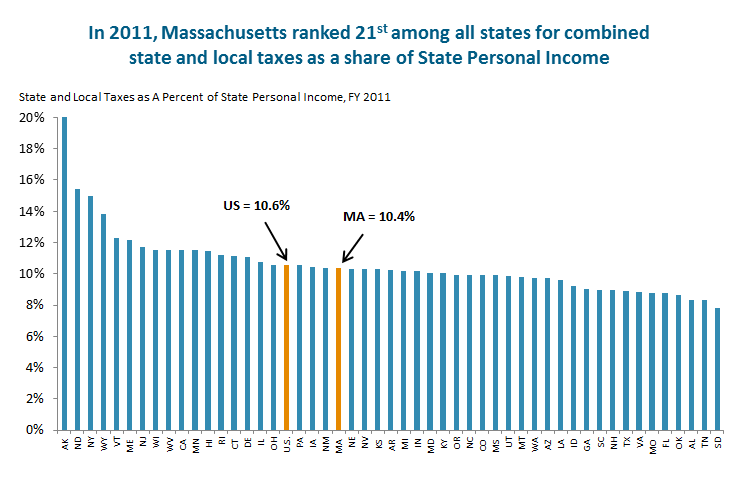 Had Massachusetts's taxes been at the national average, state and local governments would have raised an additional $650 million in that fiscal year.2

The comparisons in this fact sheet present taxes as a share of income. This measure is used—rather than per-capita taxes—because the per-capita measure conflates two separate elements: tax rates and incomes. This issue is most easily understood in the context of the income tax. If one state has an income tax rate of 5 percent and an average (taxable) income of $50,000, then the per-capita tax is $2,500. If a state where the average (taxable) income is lower—for example, $30,000—has a tax rate of 6 percent, than the per-capita tax in that state is $1,800. Thus, even though tax rates are higher in the low income state (6 percent rather than 5 percent), a per-capita ranking would show the state with the higher tax rate as having "lower taxes." Using taxes as a share of income avoids this problem. For a more complete discussion of this issue, please see the following MassBudget Facts At A Glance.

The Census data and the analysis we present in this fact sheet differ somewhat from that presented by a commonly cited source, the Tax Foundation. The Tax Foundation, like MassBudget, uses the basic structure of comparing taxes as a share of income. The Tax Foundation, however, makes a number of adjustments to the data. Two of these adjustments are particularly important. First, the Tax Foundation attempts to project current-year taxes as a percent of current-year income (which we don't do because we choose to report actual data—which lags by several years—rather than provide projections). Second, it seeks to estimate the taxes paid by residents of a state rather than taxes collected in the state. The second adjustment means that property taxes paid by a Massachusetts resident on a vacation home in Maine would count as Massachusetts taxes. While there are contexts in which such an adjustment may be helpful, for comparing tax policies of state and local government, it makes the most sense to look at the taxes collected by those governments.

1 The Census data can be found here. Personal income data can be found at the Bureau of Economic Analysis (BEA) website. Alaska's very high ratio of state and local taxes to State Personal Income (22.7 percent) is the result of taxes collected from corporations on oil extracted from public lands.

2 In fiscal year 2011, BEA state personal income in MA was $345.5 billion. If MA governments had collected a share of state personal income equal to the average share collected nationally (10.56 percent, a share 0.19 percentage points higher than in MA), state and local governments in MA would have had an additional $656 million in combined tax revenue to work with in FY 2011 (0.0019 x $345.5 billion = $656 million).