The Declining Value of the Tipped Minimum Wage in Massachusetts 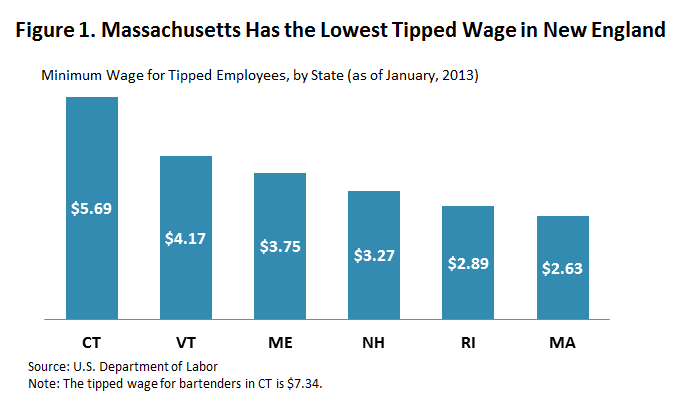 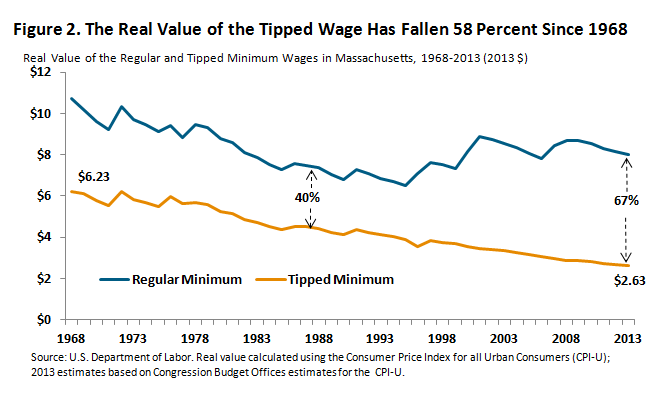 While data limitations make it difficult to estimate numbers and types of workers on the state level, tipped workers in Massachusetts are likely to resemble those across the country and analyses of national data provide a snapshot of tipped workers.1

When the value of the tipped wage declines, workers must rely to a greater extent on tips to make up for the lost value. However, tip income is volatile and subject to a variety of external factors—tips may vary depending in shift assignments, season of the year, and the economy; and the tip credit provision can be difficult to enforce.2 A robust tipped minimum wage provides important protection for workers. Eliminating the tip credit entirely, so that tipped workers earn the minimum wage—as seven states have done—provides even more protection. Indeed, analysis of national data suggests that such provisions make a real difference—the poverty rate for tipped workers in states where the minimum wage is the same for all workers is four percentage points lower than it is in states that have a tipped minimum wage equal to the federal tipped wage of $2.13, and two and half percentage points lower than the poverty rate in states, like Massachusetts, where the tipped minimum wage lies between the federal minimum and the regular minimum wage.3

1 Sylvia Allegretto and Kai Filion, "Waiting for Change: The $2.13 Federal Subminimum Wage (Economic Policy Institute, February 23, 2012), 6-7. This analysis is based on data from the 2007-09 Current Population Survey (CPS).