Looking at education spending as a percent of all the income earned in Massachusetts is useful because it shows us what share of our total economic resources are dedicated to education. This approach is similar to how at the national level we often measure spending on things like Medicare, the military, or the national debt as a percent of Gross Domestic Product (GDP). For more information on these measures, please see Adjusting for Personal Income: When, Why, and How.

Education serves many important functions, helping young people become active citizens and helping them develop skills to contribute productively in the workforce. In Massachusetts, as with most states in the nation, there is a strong connection between improving the skills of the state workforce and creating a high-wage economy (for more detail on the education/wage link, please see A Well-Educated Workforce is Key to State Prosperity). States near the national average have roughly $520 million more than we do in Massachusetts to help support the education of their kids. Further, states near the 75th percentile—states whose spending is greater than spending in 75 percent of states—have roughly $1.36 billion more to support their schools.

Overall, as seen in Table 1 below, Massachusetts ranks 33rd in the share of our state's economic resources dedicated to public education. 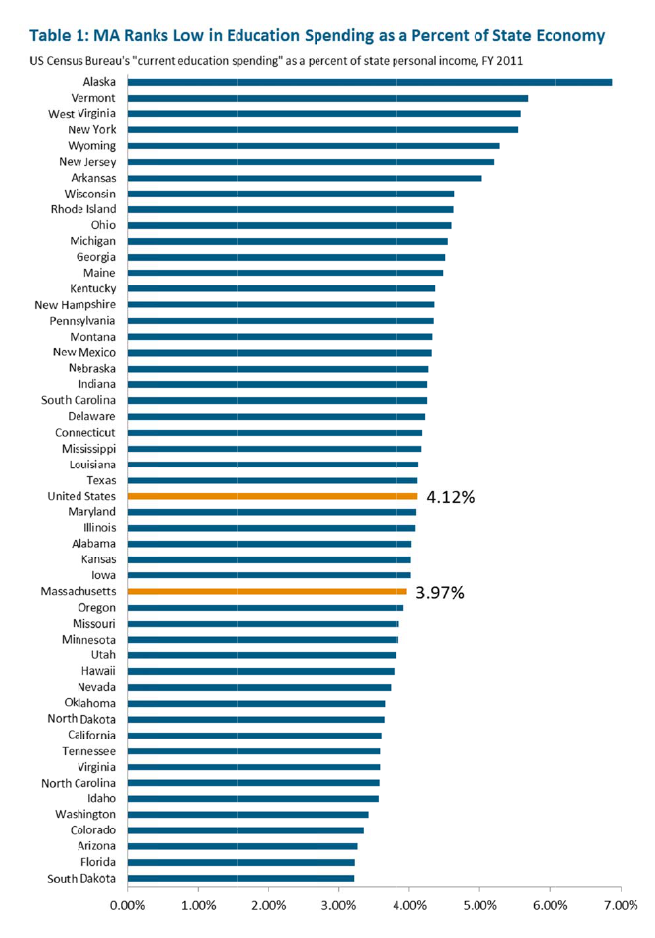 While we rank low in education support as a share of our resources, Massachusetts actually ranks high in straight per pupil spending. Table 2 below compares states by per pupil spending, with Massachusetts ninth highest in the country. Massachusetts's cost-adjusted per-pupil spending level of $13,820 is about 28 percent above the national average. Because costs vary widely across different parts of the country, this analysis adjusts reported Census spending amounts using the Regional Price Parities index. 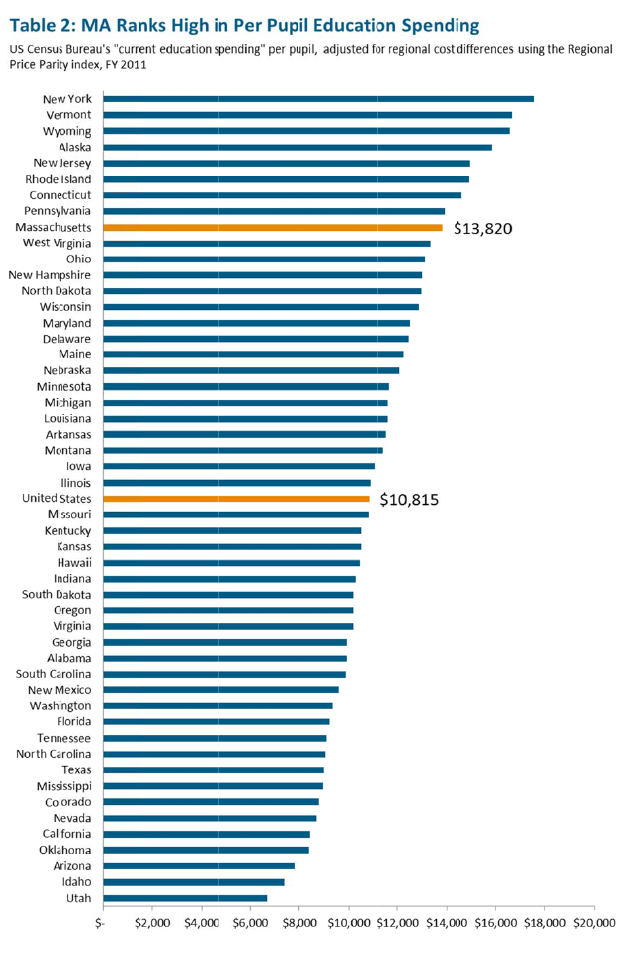 While specific rankings fluctuate somewhat year to year, Massachusetts has for many years ranked low in education support as a percent of the economy and high in straight per pupil spending. For detail on previous years, see MassBudget's analysis of FY2010 education spending data available .

So far this paper's comparisons have looked at education spending. Next, we analyze the other side of the budget ledger—the revenue side—allowing us to see where the money comes from, rather than what it's spent on. Education spending is funded through a mix of federal, state, and local revenue, with this mix varying across states. 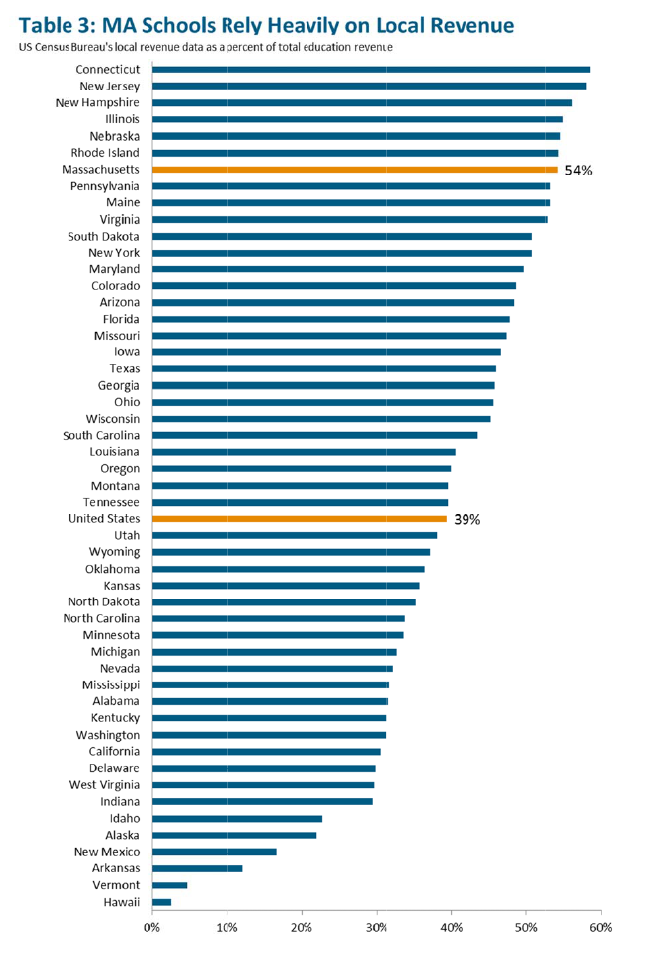 Public schools in New England have historically been especially dependent on local property taxes. The Massachusetts Education Reform Act of 1993 served to reduce somewhat this reliance in Massachusetts, ushering in a series of significant state funding increases during the remainder of the 1990s. While Massachusetts has shifted some of the education funding responsibility away from local sources, Massachusetts still relies heavily on local revenues when compared to other states.

One additional reason why Massachusetts ranks high in local education support is that we receive relatively little federal education support. Massachusetts is a relatively wealthy state, and since a significant portion of federal education revenue, such as Title 1 funding, is targeted to lower-income schools, we receive less of this funding than many other states. In FY 2011, Massachusetts ranked 36th in the nation in per pupil funding from federal sources at $1,295 per student compared with a national average of $1,527 per student.

It is also important to note that "current education spending" includes spending from federal revenue sources. Ideally spending from federal sources would be set aside for an analysis that looks at the percent of state resources dedicated to education, but calculating a more precise measure is not feasible because the Census Bureau does not separate spending by revenue source. Since Massachusetts receives less federal revenue than most states, as we described in the final section of this paper, this analysis somewhat understates Massachusetts education spending as a percent of state resources.