What's It Worth?:
The Value of the Minimum Wage in Massachusetts

When Massachusetts legislators approved the first minimum wage bill in the United States back in 1912, they directed wage boards to set minimum wage rates that were sufficient "to supply the necessary cost of living and to maintain the workers in health."1 Yet despite periodic increases the Massachusetts minimum wage has failed to keep pace with changes in the cost of living over the past four decades, and it has fallen further and further behind the wage levels of higher-paid workers. 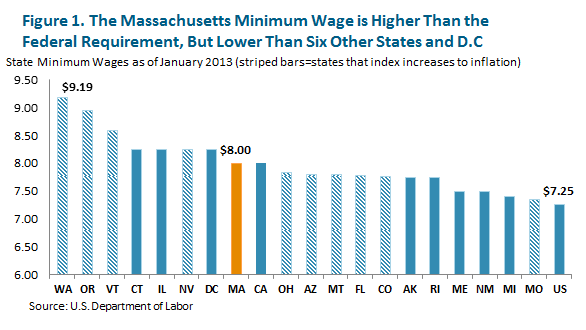 Losing Ground: The Real Value of the Massachusetts Minimum Wage

When the minimum wage does not increase from year to year, but prices and the cost of living do increase, its purchasing power becomes eroded. As Figure 2 shows, the nominal value of the Massachusetts minimum wage (i.e., the rate expressed in current-year dollars) increased gradually between the late 1960s and the mid-1990s, but these increases failed to keep pace with inflation. As a result the real value (i.e., the inflation-adjusted value expressed in 2013 dollars) dropped by almost 40 percent, from its high point of $10.72 in 1968 to $6.50 in 1995. A series of increases enacted by the legislature in the 1990s and 2000s restored some of the real value of the Massachusetts minimum wage, but at $8.00 in 2013 it remains $2.72—or 25 percent—below its 1968 level. To put it another way, in 1968 a full-time minimum wage worker earned about $21,400, measured in inflation-adjusted 2013 dollars. Today a minimum wage worker earns $16,000, or about $5,400 less than he or she would earn if the minimum wage had the same real value as in 1968. Without any adjustments to keep pace with inflation the purchasing power of the minimum wage will continue to decline—a calculation based on the Congressional Budget Office's relatively conservative assumptions about future inflation growth projects that the real value of the Massachusetts minimum wage will fall below $6.50 per hour by the end of the decade. 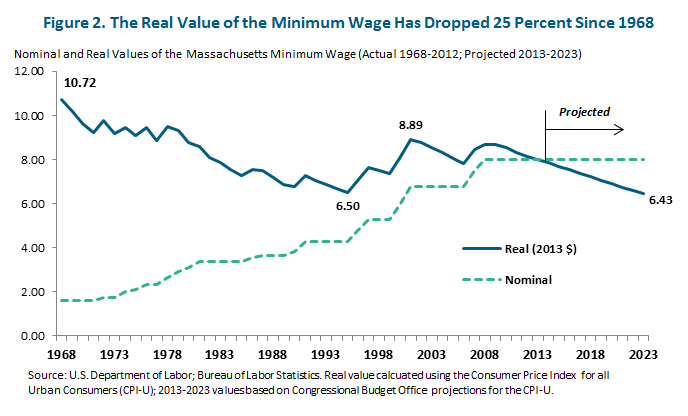 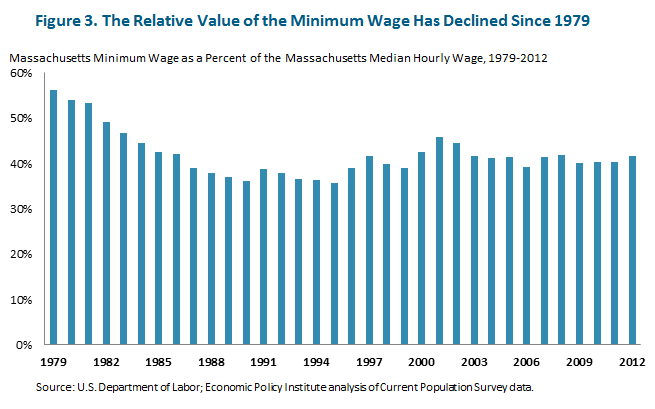 When the minimum wage is compared to wages for higher-paid workers, the contrast is even more striking. As Figure 4 shows, the real value of the minimum wage fell between 1979 and 2012, while wages for the top 20 percent of workers grew at a steady clip. In 1979 minimum wage workers earned $16.19 less per hour than earners in the top quintile, after adjusting for inflation, but by 2012 that gap had grown to $27.43. 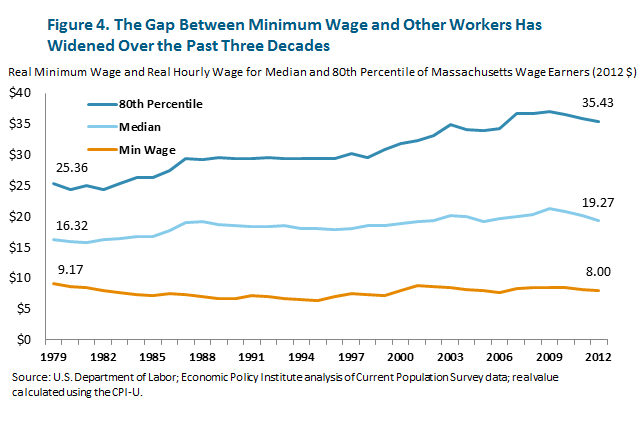 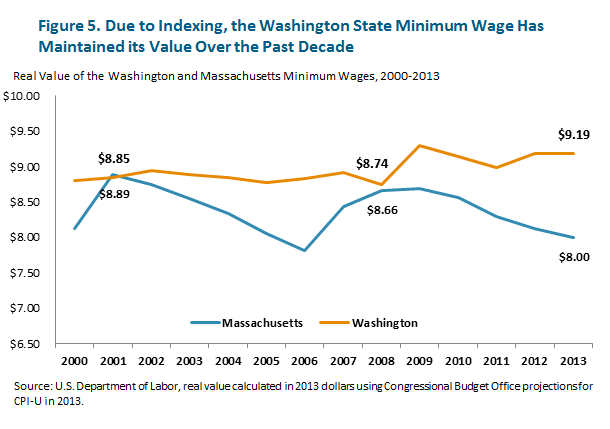 Indexing the Massachusetts minimum wage would not restore the value that has been lost over the years, although it would help to prevent further erosion of the purchasing power of minimum wage workers. Raising the minimum wage and indexing it to inflation would both restore some amount of value and prevent further decline in value. The tool below allows you to see the effect in greater detail.

As the tool shows, indexing the minimum wage at its current level as of 2014 would maintain that level in coming years, while increasing it to $10.00 per hour and indexing it would result in real value of around $9.74 in the future (in both scenarios inflation will have eroded some of the value of the wage by the time indexing begins in 2014, so the real values maintained through indexing are somewhat lower than $10.00 and $8.00, measured in 2013 dollars). The tool also compares the projected future value of the minimum wage under these assumptions to the value of the minimum wage assuming no change in current law. (The precise change in actual real value from year to year would ultimately depend on actual inflation rates and the exact method of calculating annual increases; see the notes at the end of this fact sheet for more information.)

Notes on Sources and Methodology

Data on current and historical state minimum wages described above comes from the Wage and Hour Division of the U.S. Department of Labor (http://www.dol.gov/whd/state/stateMinWageHis.htm). Note that in cases where a state sets a minimum wage that is lower than the federal minimum wage the federal minimum prevails for all employees covered by the Fair Labor Standards Acts. This group includes most employees; a list of job types not covered by the law can be found at the Department's website (http://www.dol.gov/elaws/esa/flsa/screen75.asp).

Throughout this fact sheet the real value of the minimum wage and the hourly wages is calculated using the Consumer Price Index for All Urban Consumers (CPI-U), a standard measure of inflation available at the Bureau of Labor Statistics (BLS) (http://data.bls.gov/cgi-bin/surveymost?cu). Since the CPI-U for 2013 will not be calculated until the year is complete, when calculating real value in 2013 dollars we use a projected CPI-U value that is based on Congressional Budget Office (CBO) projections of CPI-U growth. Likewise, projections for the future value of the minimum wage are based on CBO projections for CPI-U growth over the 2013-2023 period.

States that index their minimum wages use a variety of inflation measures and methods to calculate annual increases. In general, states calculate increases some months before the year in which they become effective, using inflation data from prior months to determine the increase. States typically use either the CPI-U or the Consumer Price Index for Urban Wage Earners and Clerical Workers (CPI-W). The latter is a somewhat more narrow measure that reflects growth in expenditures for households where more than half the income comes from clerical or wage occupations, and where there is at least one employed person, but it does not vary greatly from the CPI-U. Some states use a regionally specific version of these indices (for instance, Colorado uses the CPI-U that BLS produces for the Denver-Boulder-Greeley area). For the purpose of modeling the future effects of indexing the Massachusetts minimum wage in this fact sheet, we used semi-annual CPI-U data and grew these values based on CBO assumptions of CPI-U growth for the appropriate year. We assumed that the state would calculate the annual increase early in the fall of the year before the one in which the increase took effect, and that it would compare the average CPI-U for the preceding June-July period over the previous year. In other words, to calculate an increase for January 2014, the state would use data from July 2012 to June 2013, and compare it to the July 2011-June 2012 period. In practice somewhat more recent data might be available, but this method is consistent with the process used by states that currently index minimum wage increases.

1Chapter 706 of the Acts of 1912, "An Act to Establish the Minimum Wage Commission and Provide for the Determination of Minimum Wages for Women and Minors." (Signed by Governor Foss on June 4, 1912).

2The federal minimum wage stood at 5.15 per hour from September, 1997 to July, 2007, its longest stretch without a change. By the time of the 2007 increase, 33 states had established minimum wages higher than the federal level; the new federal level superseded some of these.

3Changes in the real value of the indexed Washington wage may exceed or lag actual inflation due to the fact that the annual inflation adjustment is made using data from a slightly earlier time period; the rise in real value between 2008 and 2009 is largely due to slight deflation in 2009 (there was no increase in the statutory minimum wage rate in that year).