For a young adult just out of school, finding that first job has never been easy. Unfortunately, over the past ten years finding that first job has gotten harder. A workforce in which more jobs require advanced training, coupled with the lingering effects of the recent deep recession have produced even greater employment obstacles for the young.1 In 2011, 13.8 percent or close to one in seven young adults (ages 16-24) in Massachusetts is unemployed.2

This is a dramatic increase—more than doubling—of the youth unemployment rate in 2000, which was 6.7 percent, or one in fifteen. A recent study by the Department of Education's Task Force on Integrating College and Career Readiness concluded that career readiness has not been fully integrated into the Massachusetts school curriculum and that this failure has harmed students' ability to find career and job options.3 That is why the state has created and invested in programs designed to help these youths prepare for the working world.

These programs could not be more vital as the number of young adults who are neither in school nor working (so-called "disconnected youth") is growing. This population presents a particular challenge to the state's economy, as those young adults are at greater risk for longer-term unemployment and social dislocation.4

In the mid-2000s, the state invested more in programs that provide public and private sector jobs for youth, many of which include embedded academic support. Youth employment programs were cut during the Great Recession, which began in Fiscal Year 2009. For FY 2014, the Governor proposes funding these programs at higher levels as seen in the chart below.5 It is important to note that the ability to fund these higher levels of support is dependent, in large part, on passage of the Governor's Revenue proposal, explained here. 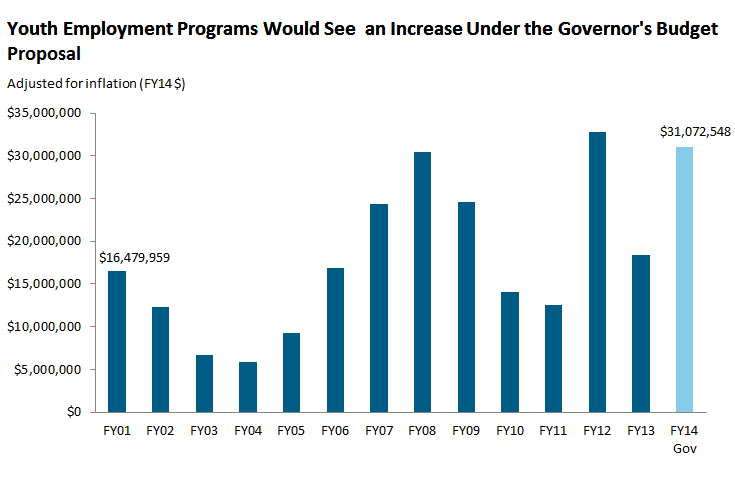 As seen in the graph above, there was an increase in funding in FY 2012, mostly the result of increases to the Safe and Successful Youth Initiative and the YouthWorks program, explained in more detail below.

The Governor's FY 2014 budget proposes an increase of $12.7 million to youth employment programs and related services. These programs, and the Governor's proposed spending levels, are outlined below. For a more in depth explanation on these programs, the Massachusetts Budget and Policy Center recently launched the Children's Budget, a fully interactive breakdown of all state programs affecting young people. For more information visit children.massbudget.org.

Youth employment programs with funding increases in the Governor's budget include:

Programs that essentially remain at the same funding levels as FY 2013 include: 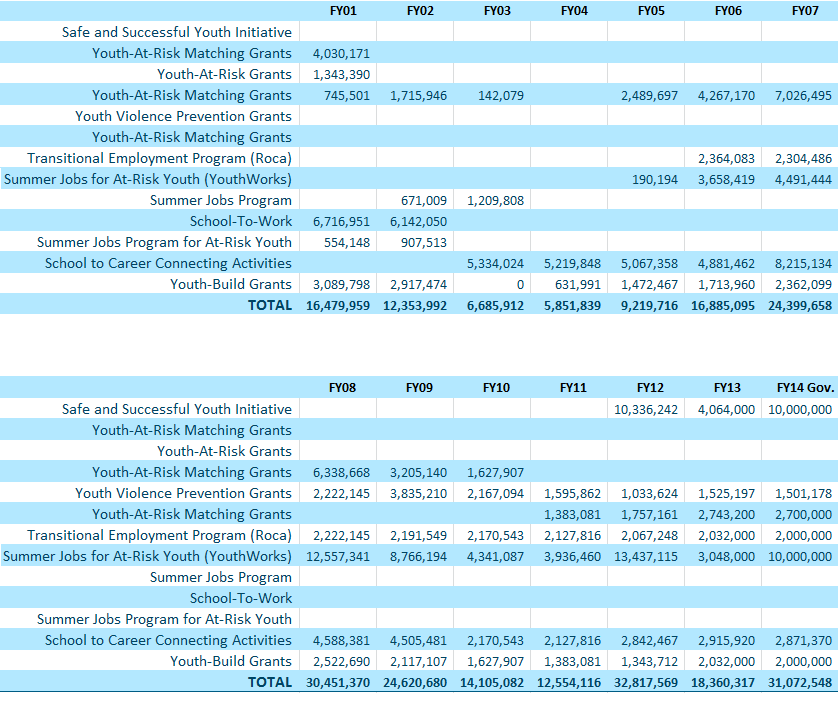 3 For more information, and conclusions drawn from this student please see "From Cradle to Career: Educating our Students for Lifelong Success"

6 Line item language for YouthWorks states that funding shall be made available through September 1st of the following fiscal year.