The emergence of a knowledge-based economy over the past several decades has led to a widening gap between workers with bachelor’s degrees and those without. As we discuss below, the greatest increases in wages over the past four decades, and in the relative earnings benefit of attending college, are going to the highest-paid 10 percent of workers with bachelor’s degrees. 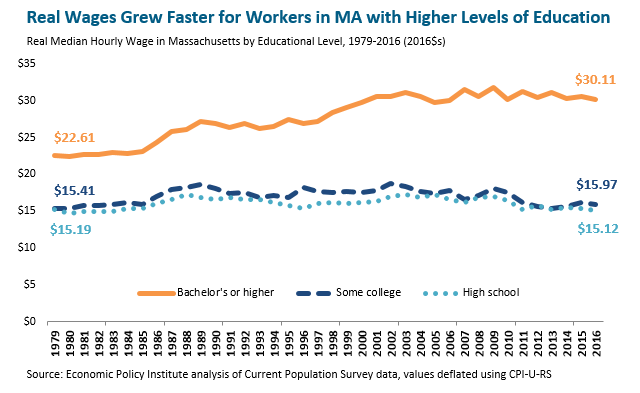 Due to limitations in the data, this analysis does not break out wage earners who have earned an associate’s degree from those who have “some college” but no degree. However it is worth noting that a growing body of research shows higher earnings for associate’s degree holders compared with workers who attended college but did not earn a degree. One recent study of a handful of states (not including Massachusetts) found that “completing an associate degree yields on average approximately $4,640-$7,160” in annual earnings above entering college but not completing.1 Among full-time, year-round workers nationally, the U.S. Census Bureau reports that median annual earnings for those holding an associate’s degree were $46,000 in 2015, compared with $41,700 for those with some college but no degree (see chart below). 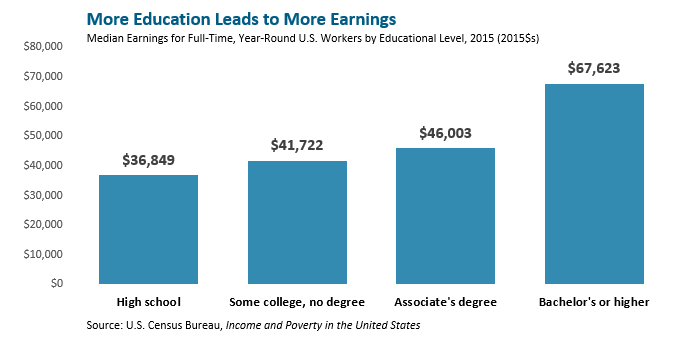 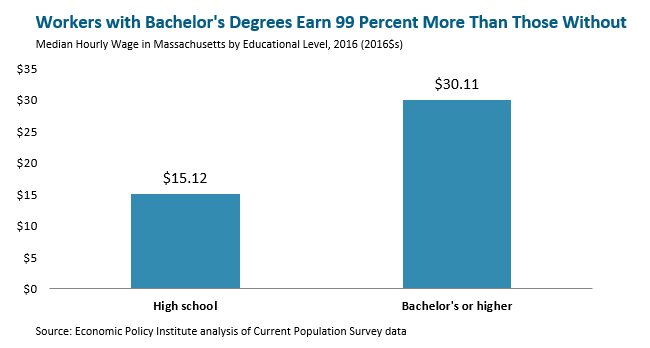 Nationally, median earnings for full-time, year-round workers with bachelor’s degrees were 84 percent higher than for high school graduates in 2015. As the chart above shows, hourly wages for workers in Massachusetts with a four-year college degree were about double the wages of those who have not attended college.2 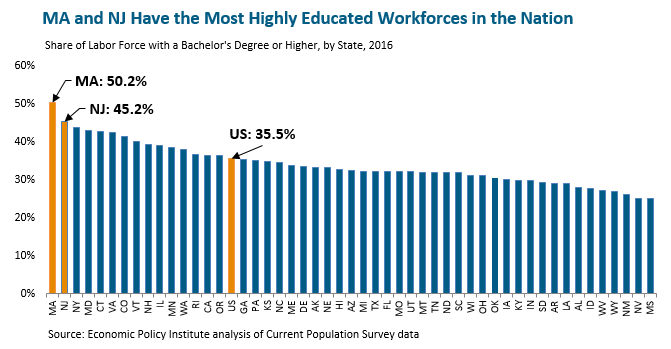 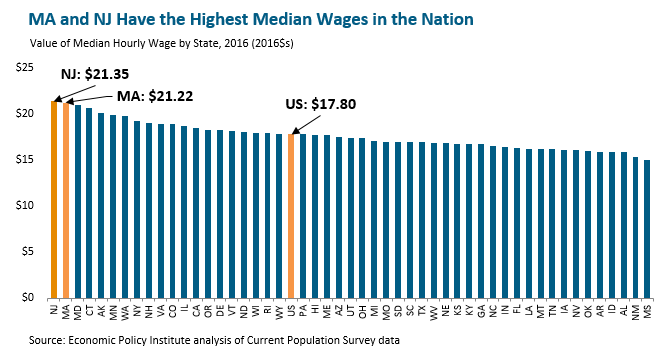 While it might seem obvious in 2017 that higher levels of college education would be associated with higher earnings at the state level, this relationship is actually a fairly recent feature of the U.S. economy. In 1979, the correlation between the educational attainment of a state's workforce and its median hourly wage was weak. 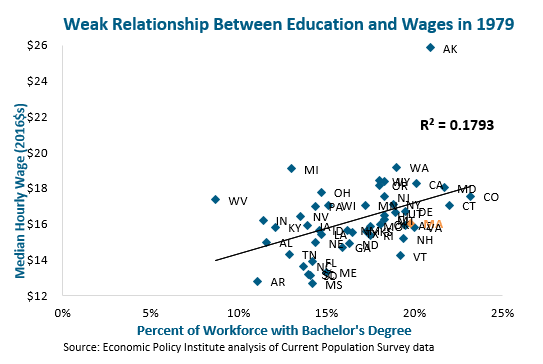 Since then, the link between educational attainment and household income has grown much stronger, as seen in the following chart. 3 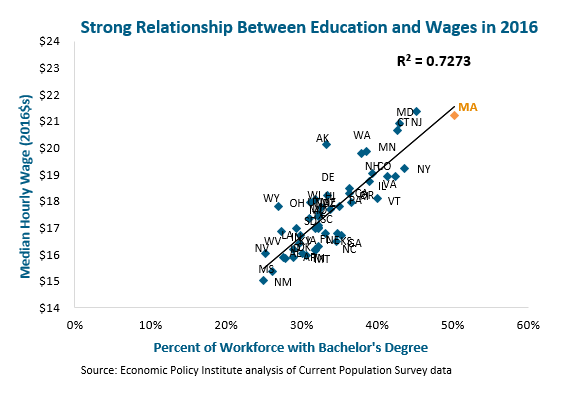 These cities and towns at the lower end of distribution are almost all so-called “Gateway Cities.”4 (To learn more about our Gateway Cities see MassBudget’s report Income Growth and Gateway Cities: What Happened, and Is There a Path Back to Broadly Shared Prosperity?.) 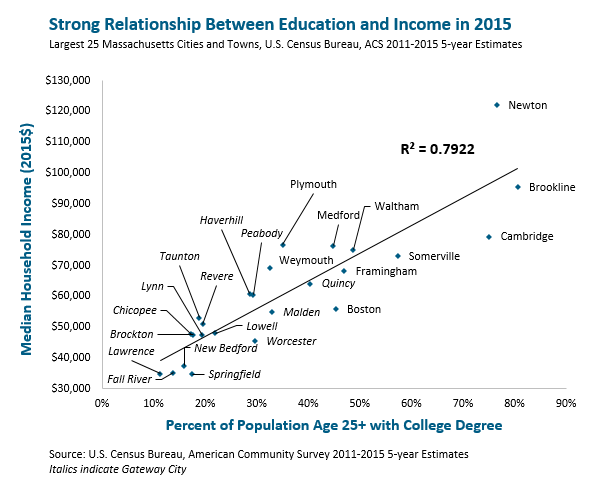 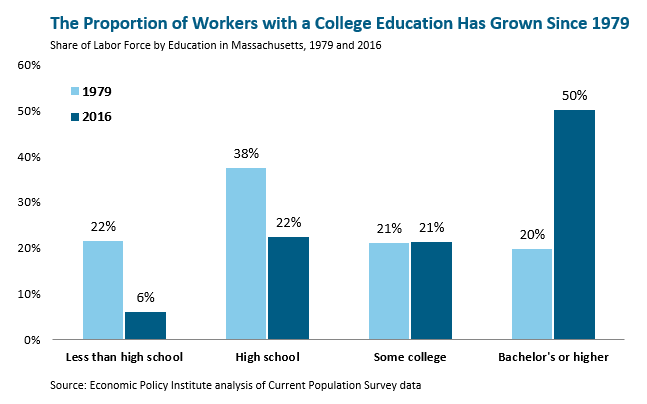 Similarly, Massachusetts has seen its median wage – which was actually slightly below the U.S. median in 1979 – grow faster than all but one other state over the same period. 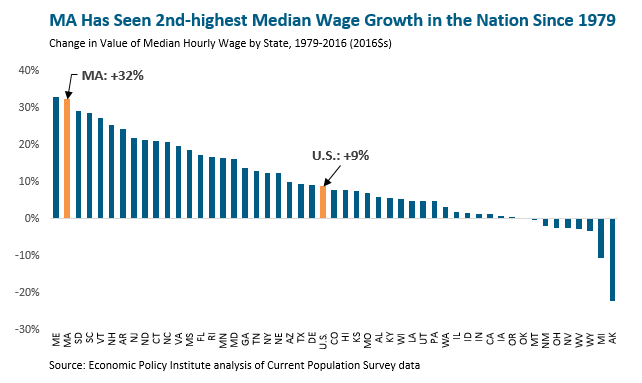 As noted above, the tight correlation between bachelor’s degrees and earnings is only a few decades old. The strengthening of this relationship is complex, and has not progressed uniformly for all workers. The following chart shows wages at the 10th, 50th, and 90th percentiles for Massachusetts workers with high school diplomas and workers with college degrees over the past four decades. 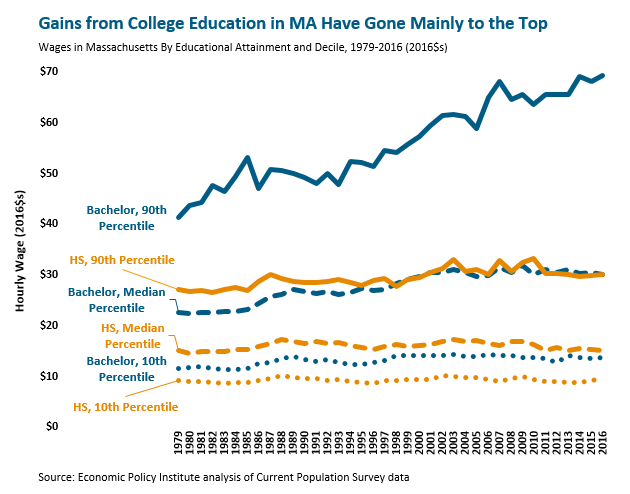 Wages for college graduates at all levels have consistently been higher than their high-school graduate counterparts. This difference in earnings between workers with a college degree and those with no more than a high school diploma is called the “college wage premium.” In 1979, the lowest-paid 10 percent of bachelor’s degree holders earned 25 percent more than the lowest-paid 10 percent of high school graduates. By 2016, this college wage premium had risen to 45 percent. So there has been some increase in the relative wage benefits of a college education even at the low end of the earnings spectrum.

But this increase has been quite modest by comparison with workers higher up the distribution. In 1979, the median college graduate earned 49 percent more than the median high school graduate; by 2016 this premium had increased to 99 percent, as seen above in the chart titled “Workers with Bachelor's Degrees Earn 99 Percent More Than Those Without.”

But college degrees alone, as the above chart shows, have led only to modest gains in wages for the lowest-paid ten percent of Massachusetts workers with a college degree. Even the median wage for Massachusetts workers with a college degree stopped growing at the Great Recession, falling 5.5 percent from 2009 to 2016. Over the past four decades, the 90th-percentile has seen the greatest increases in wages among college graduates and the greatest increases in the college wage premium.

Expanding access to higher education can benefit both individual students and the overall state economy, as workers with a college degree earn more than those without. But the cost of attending college has been increasing steadily, and more students are taking on ever-increasing debt to pay those costs. The increase in student costs is largely the result of reductions in state funding for public higher education, which fell $3,000 (on an inflation-adjusted basis) per student from 2001 to 2016. Meanwhile, costs have been shifted onto students, as tuition and fees rose $4,000 per student over the same period. The University of Massachusetts recently announced a 3 percent tuition increase for the fiscal year 2018, marking the third consecutive year of increases. (To understand how students bear a greater share of the costs of higher education as the state has drawn down its support over the years, see In 16 Charts: Higher Education Funding in Massachusetts.)

State funding for higher education is especially important for supporting students who come from Gateway Cities. As seen above, these cities have the lowest rates of college-educated workers and the lowest household incomes. 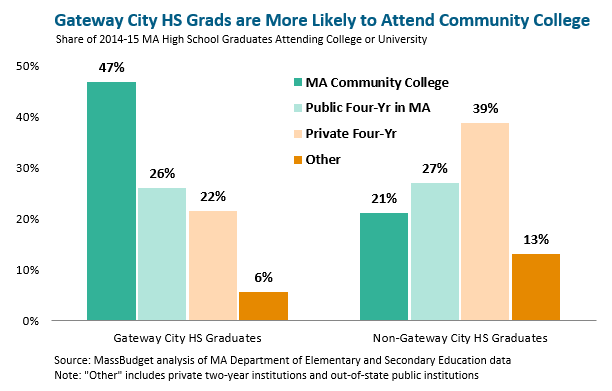 As we saw above, completing community college and earning a two-year associate’s degree leads to higher income than attending college without completing. Earning a bachelor’s degree has even greater benefits. Whether students end their studies after earning their associate’s or go on to enroll in a four-year degree program, it’s clear that community college can play a significant role in the success of Massachusetts high school graduates, particularly those from Gateway Cities.