Since the start of the Great Recession, which lasted from December 2007 through June 2009, Massachusetts has added nearly 300,000 jobs.1 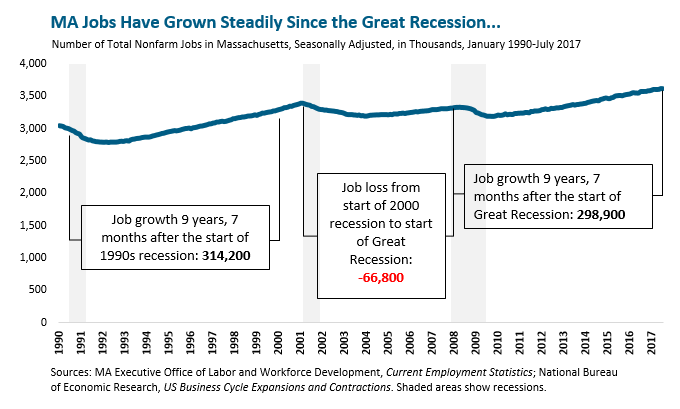 July 2017 marks another 58 months from the point at which Massachusetts recovered all the jobs it lost during the Great Recession, and job growth has continued apace. Massachusetts now has 9.0 percent more jobs than when the Great Recession began in December 2007, among the highest rates of job growth in the country over that time. Again, this is close to the state’s 10.5 percent job growth seen at the same point relative to the start of the recession that began in July 1990. 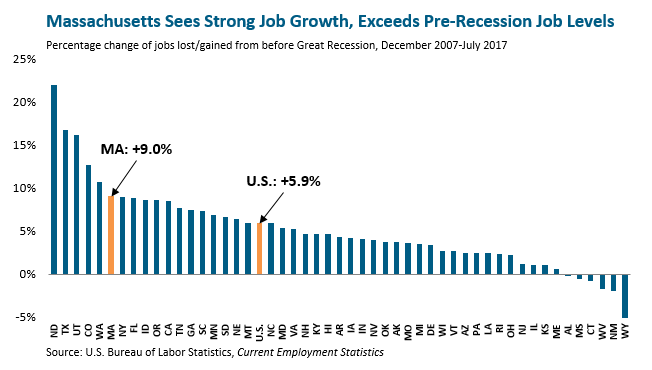 Alongside strong job growth, Massachusetts has seen the unemployment rate fall sharply since the Great Recession. The official measure of unemployment considers all people who (1) are available to work and (2) have actively looked for work in the four weeks preceding the monthly Current Population Survey administered by the federal government. That is shown in the chart below. 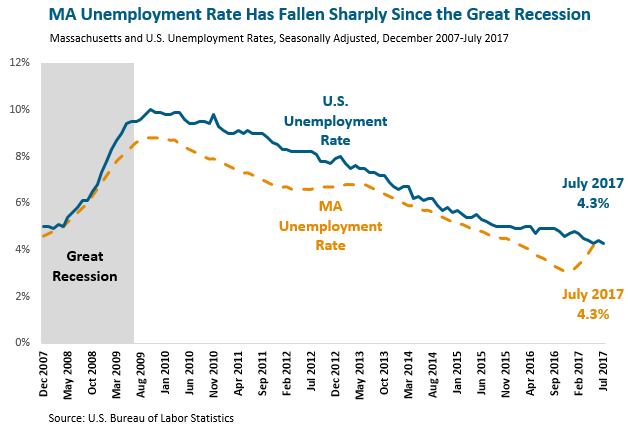 Because this measure includes only recent job seekers, it can increase with the entry of new or returning job seekers into the labor force before they find work. In a strengthening economy, there will be plenty of these types of workers, which can have the effect of increasing the unemployment rate in the short term.

As the chart above shows, the state unemployment rate as of July 2017 (4.3 percent) is more than a full percentage point higher than where it was in December 2016, just seven months previously (3.1 percent). This increase is due to rapid growth in the number of people newly looking for work — growth that has outpaced the increase in employment. This total number — employed workers plus active job seekers — is the labor force. As the following chart shows, Massachusetts leads the nation in labor force growth in the first seven months of 2017. 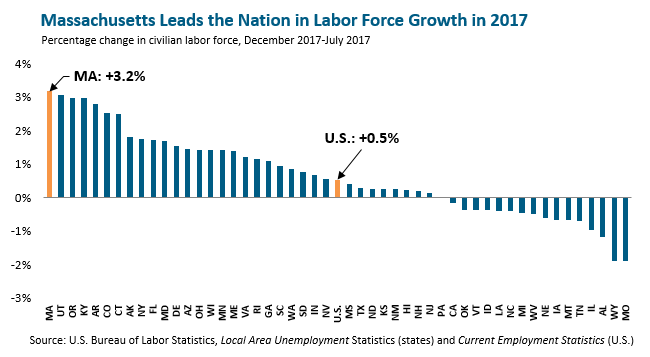 To give ourselves a more complete understanding of recent changes in the labor market, it is helpful to consider not only how many workers are officially considered unemployed (those who were actively looking in the previous four weeks) but also how many (1) want to work but have given up looking and (2) want full-time work but can only find part-time work. These groups are called “marginally attached workers” and “involuntary part-time workers,” respectively. The U.S. Bureau of Labor Statistics (BLS) publishes statistics that measure all of these situations combined: it’s called labor underutilization.2 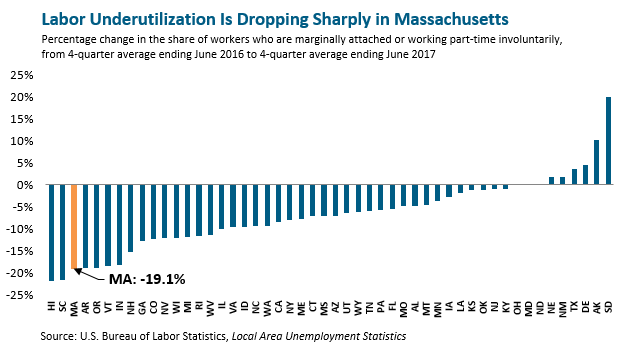 The increase in labor force participation and the sharp drop in the broader measure of underutilization suggest a growing recognition on the part of all workers in Massachusetts that they will be able to find jobs. In particular, while workers with more education fare better in the Massachusetts economy (as discussed in the Education and the Economy section), workers with no more than a high school diploma saw the biggest percentage declines in labor underutilization from 2015 to 2016. 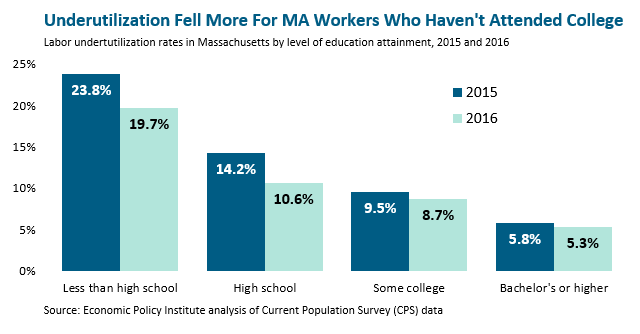 While the employment situation in Massachusetts continues to improve and to outpace most other states, wages still aren’t increasing the way we would hope for in a tightening labor market. This is discussed in depth in the Wages and Income section, but here we can see that average wages for middle-class workers in Massachusetts (the middle 60 percent of the wage distribution) have barely moved in recent years. In 2007, just before the Great Recession, the average middle-class wage was $22.33, in 2015 it was $22.53, and in 2016 it was $22.60, after adjusting for inflation. 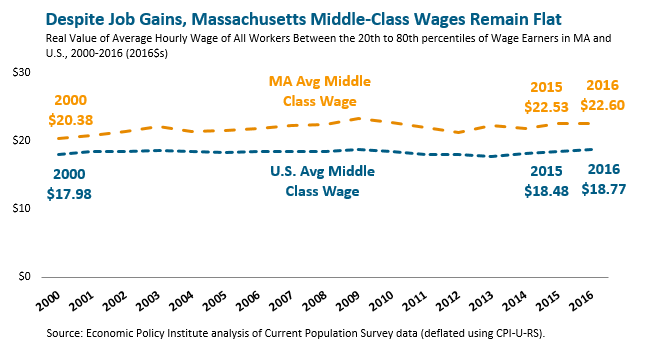 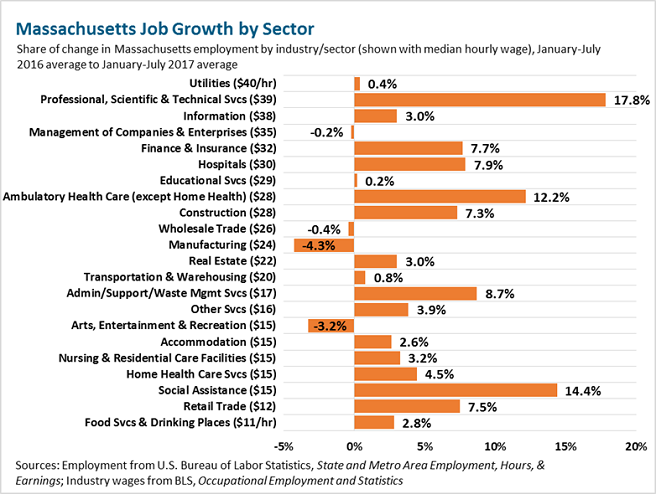 19 years, 7 months from the start of the recession.

3The U.S. Bureau of Labor Statistics publishes state-level labor underutilization data on a four-quarter moving average basis in order to counteract the problem of small state-level sample sizes, and to eliminate regular seasonal changes in employment patterns. This approach increases the reliability of the estimate but may not reflect up-to-the-moment labor market conditions.