For most workers, wages in Massachusetts have been stagnant for decades, as seen in the following chart. 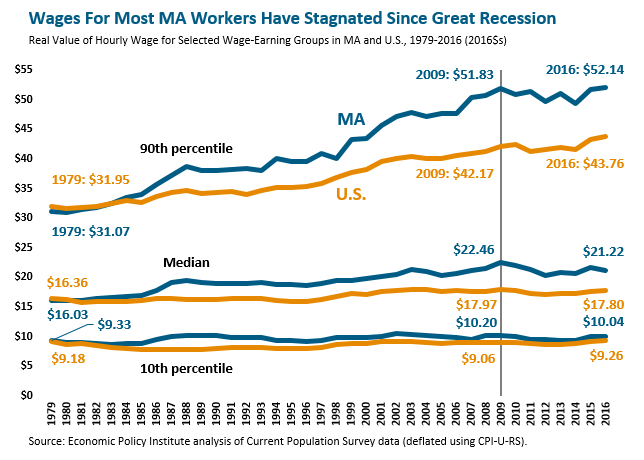 Because most households rely on wages for the vast majority of their incomes, stagnating wages translates into weak overall income growth, which is what we have seen for most households in Massachusetts over the past four decades. Alongside this have come enormous gains for the highest-income households, who derive a relatively small share of their income from wages.1 From 1979 to 2014, a pattern of growing inequality emerges, as shown in the chart below. 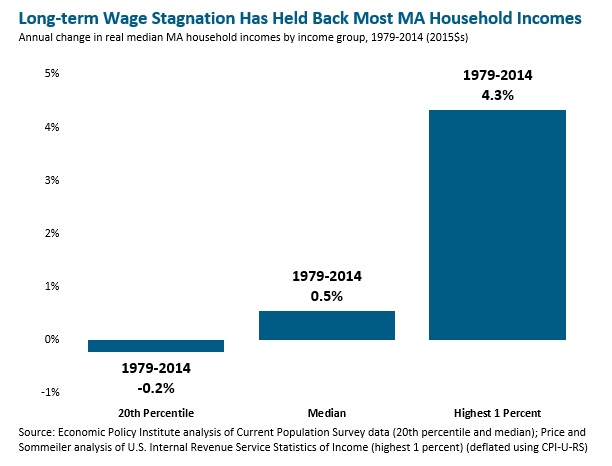 It has not always been the case that a disproportionate share of income gains have gone to the very highest-income households. The three decades after World War II were an era of broadly shared prosperity, during which incomes grew both more rapidly and far more equitably than they have over the past four decades.2

During this post-WWII period, wages grew in tandem with productivity — the measure of economic output per hour worked. As productivity grew, workers saw these gains translate into increases in their hourly wages, which grew 2.6 percent per year from 1948 to 1973. Since 1973, however, the link between productivity and wages has been broken, as shown in the following chart. During this period of disjuncture — referred to as the “Great Decoupling” — wages grew just 0.3 percent per year. 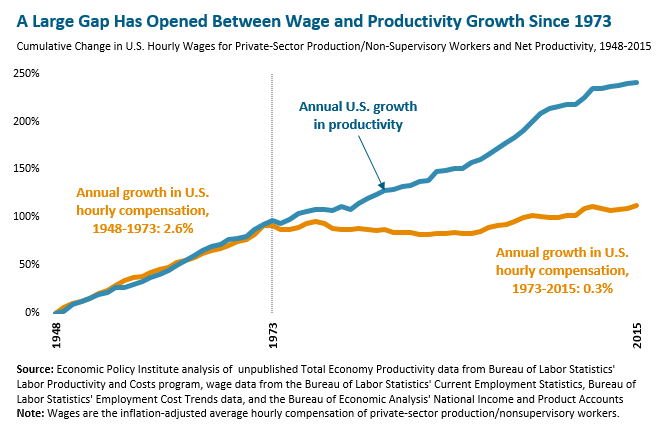 As we saw above, household income growth in Massachusetts has been highly uneven since 1979, declining at the 20th percentile and growing by over 4 percent per year among the highest-income one percent of households. Overall, pre-tax income in Massachusetts grew at an average rate of about 1.5 percent per year from 1979 to 2014. What if the post-war trend of shared prosperity had continued, and all households had seen their incomes grow at this average rate over the past four decades? Under that scenario, depicted in the following chart, 90 percent of households would have higher incomes today. Household incomes in the lowest-income 20 percent would be $36,400 -- 79 percent higher per year than it actually is. The median household would have over $88,300 in annual income -- 37 percent more than it does today. This kind of evenly distributed growth would have painted a very different picture of the Massachusetts economy from the one we actually see — one of enhanced opportunity for many Massachusetts families. 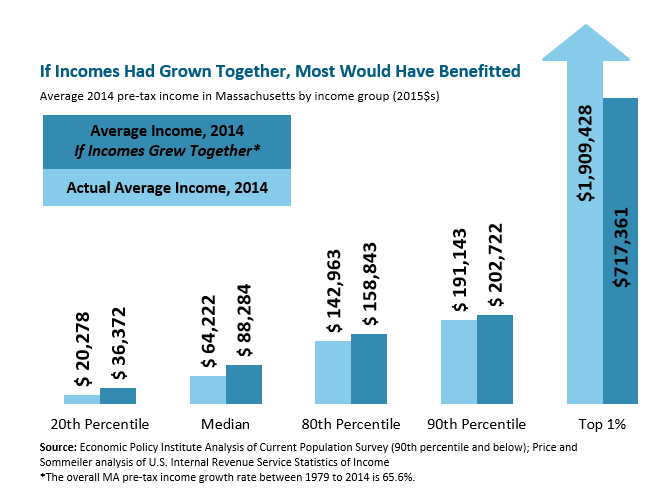 The drastically uneven distribution of the gains from economic growth is a national issue, to be sure, but the impact of the Great Decoupling can be seen clearly within Massachusetts, as well. Since the late-1980s, wage growth for most workers has not come close to keeping up with productivity gains in the state. 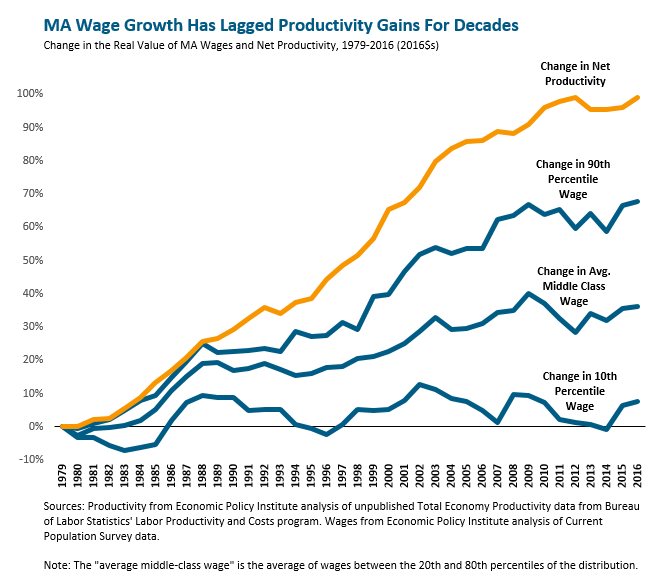 The lowest-paid workers in Massachusetts (the 10th percentile) have seen the slowest wage growth over the past four decades – just 0.2 percent per year, for a total of 7.6 percent over the entire span3. As the above chart shows wages at the 10th percentile have not been meaningfully tied to productivity in Massachusetts since 1979. Since the recession in the early-1990’s recession, in fact, as the following chart shows, the only times the 10th-percentile wage has increased have been after an increase in the state minimum wage. 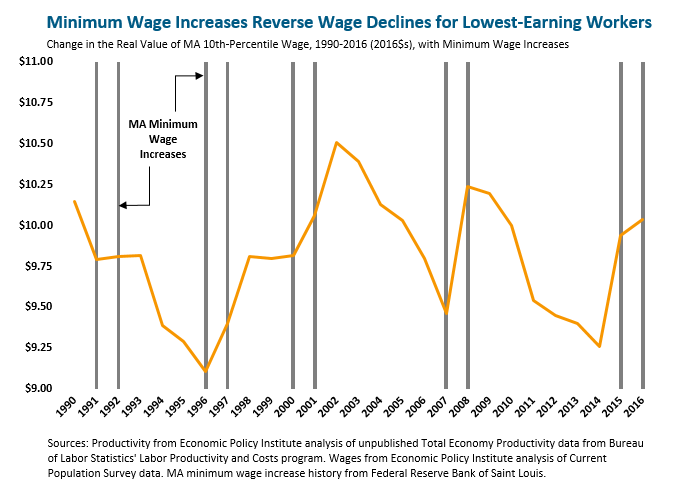 In 2015, the Massachusetts minimum wage increased from $8 per hour to $9, the first of three yearly one-dollar increases that brought the state minimum wage to $11 in 2017. From 2014 to 2015, wages for the lowest-earning 10 percent of workers increased over 7 percent, and another one percent from 2015 to 2016, as shown in the following chart. These two years of increases in the 10th-percentile wage followed five years of decline, keeping with the pattern seen above: wages for the lowest-paid workers go up when—and only when—Massachusetts increases the minimum wage. 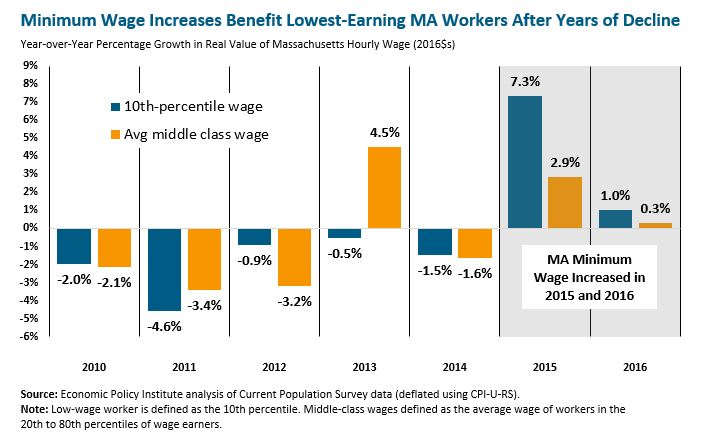 Also shown in this chart are wage changes for the state’s middle-class workers (the middle 60 percent of the wage distribution), which grew just 0.3 percent last year after a nearly 3 percent gain from 2014 to 2015. This lack of strong middle-class wage growth from 2015 to 2016 is, seemingly, a puzzle, given the state’s continued strong job growth and marked declines in “labor underutilization” — a broader measure of the employment situation that counts not only workers who are “officially” unemployed (that is, who have looked for work in the previous four weeks), but also (1) those who want to work but have given up looking and (2) those who want full-time work but can only find part-time work. (See the Jobs and Employment section of this report for a discussion of these trends.) In a tightening labor market, wages should be growing.

Part of the explanation for the apparent wage stagnation could be found in who joined the workforce in 2016. Workers with lower levels of educational attainment — no more than a high school diploma — came off the sidelines at a much faster pace than workers who have attended college, as seen in the following chart.

Disproportionate employment growth among young workers and those without a college education — both of whom are among the lowest-paid workers — are likely part of the explanation for what appears to be little movement in wages in the past year.5

Economists who study wage dynamics using public data sets like the Current Population Survey try to account both for the effect of individual persons’ wage changes from one time period to another (a raise, or an increase from switching jobs) and for the effect of who makes up the workforce. These are known, respectively, as the wage growth effect and the composition effect.6

Even though hourly wages at a given percentile may be flat, individual workers earning at or below the median could still be getting raises, as we would expect in a tightening labor market (the wage growth effect). But if the workforce is growing disproportionately below the median — which it likely is, given the relative increase in employment among young workers and those without a college degree — then the composition effect would pull down wages at particular percentile levels (e.g., 10th, 20th) at or below the median. 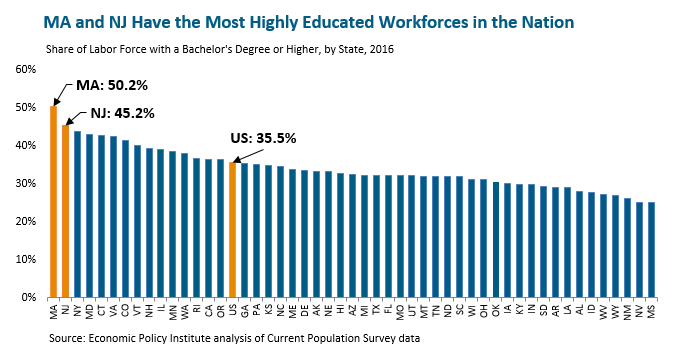 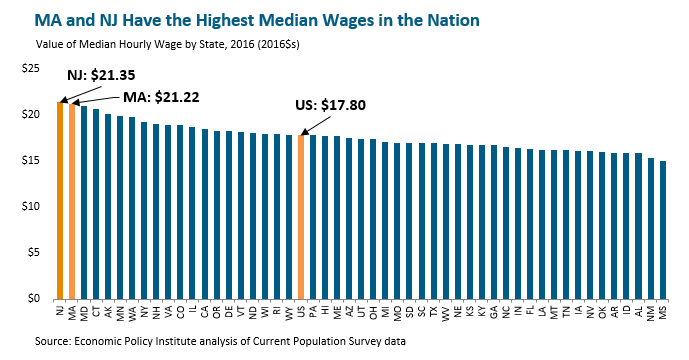 1For Massachusetts households with incomes of $1 million or more, salaries and wages constituted 32 percent of income in 2015, about the same share as capital gains. U.S. Internal Revenue Service, Statistics of Income, Table 2.  Individual Income and Tax Data, by State and Size of Adjusted Gross Income, Tax Year 2015. Downloaded August 14, 2017.

5Elise Gould, “Wages for workers with a high school degree or less rose the fastest over the last year,” August 2, 2017.