The State of Working Massachusetts 2013

MassBudget's State of Working Massachusetts presents a snapshot of economic conditions facing workers in Massachusetts, along with some of the long-term trends affecting workers and their families. It is updated throughout the year as new data become available.

For a view of the conditions facing workers nationwide, see The State of Working America, a project of the Economic Policy Institute

A strong economy is one that works for everyone, including young and experienced workers, children and families, lower-wage and high-wage earners. Over the past year, the Massachusetts economy has continued to grow and the median income has inched upward, but despite these gains the statewide poverty rate remains stubbornly high and wages are still lower than they were in 2007, before the "Great Recession."

Historically, within a year or two of the end of a recession, the national poverty rate has begun to decline. But that hasn't held true for the two recessions we've had since 2000—not for the U.S. and not for Massachusetts. Today, nearly four years after the end of the "Great Recession," our statewide poverty rate is 11.9%, which is substantially higher than it was in 2007, but still lower than the national rate. 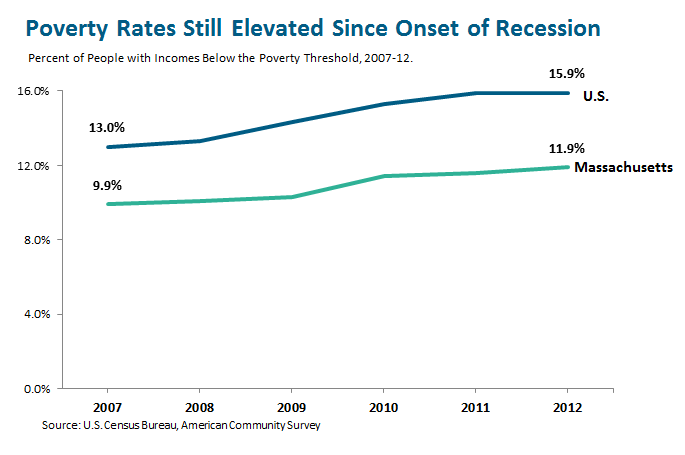 Over 1 in every 7 children across the state is currently living in poverty. Child poverty can have a substantial impact on kids' long-term growth and future opportunities. Research on economic mobility has found that children exposed to many years of poverty are far more likely to be poor as adults.1 As is the case with the overall poverty rate, child poverty in Massachusetts is lower than the U.S. as a whole, but still significantly higher than it was pre-recession. 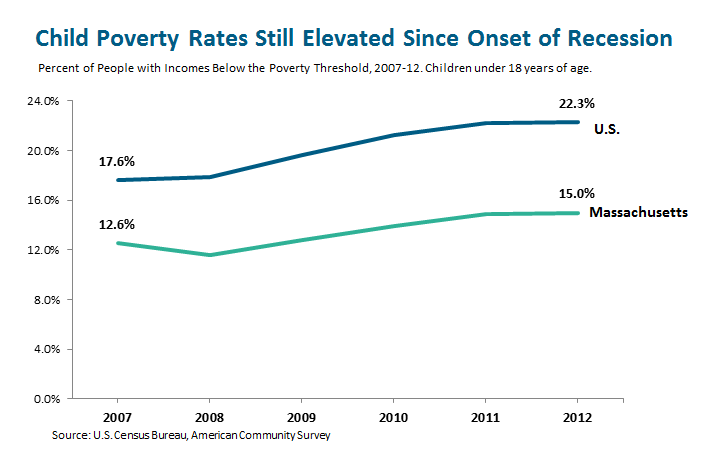 Addressing the challenges of poverty could involve a range of different investments and interventions:

In addition to covering issues of poverty, the various sections of The State of Working Massachusetts discuss the jobs situation in our state, wages, income, and the important role education plays in all of these. We invite you to read more about any of these areas, and to check periodically as materials get updated.

1 The National Center for Children in Poverty has a detailed report on Child Poverty and Intergenerational Mobility. Additional information on economic mobility is availabe at the Economic Policy Institute.