The State of Working Massachusetts 2014
swma14_poverty

Massachusetts is one of the wealthiest states in the nation. However, we have seen here the same pattern we see nationally: as the economy has grown over the past several decades, incomes have been stagnant or declining for most families, while the highest income residents have received virtually all of the benefits from our economic growth.1 As a Commonwealth, we are far stronger when we do not allow poverty and a lack of opportunity to stand in the way of people, particularly children, reaching their full potential.

Today, more than 1 out of every 8 people in Massachusetts lives below the federal poverty threshold (roughly $24,000 per year for a family of four).2 In comparison, in the U.S. as a whole, 1 in every 6 people lives below the poverty line.

Historically, poverty typically declines within a year or two following the end of a recession, but that hasn't held true for the two recessions since 2000. The most current data available from the U.S. Census (2013) shows that, nearly five years after the official end of the "Great Recession," our statewide poverty rate is 11.9 percent (see chart below). 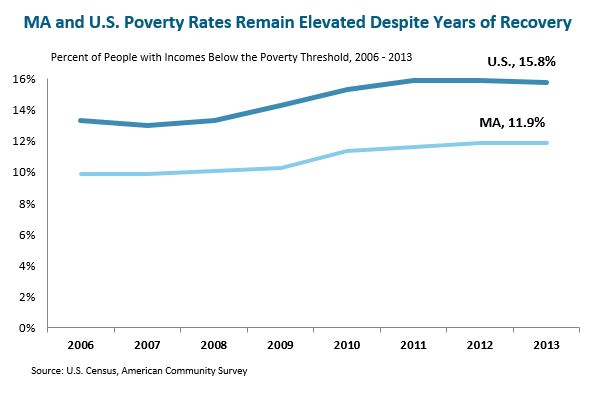 This poverty rate is substantially higher than it was in 2006 (a similar point in the ups and downs of the economic cycle, which allows for a better apples-to-apples comparison between the two years).  Notably, most people living in poverty are working hard but simply cannot make ends meet: in 2013, almost two-thirds (64 percent) of Massachusetts working-age adults (25-64) living at or near poverty worked either full or part-time.3 And, it’s not only people living in poverty who are struggling. Even though our economy has grown significantly over the past 40 years, wages for average workers have hardly grown at all (see the Wages & Income section of this report). As mentioned throughout this report, a combination of programs and policies at the state and federal levels – including tighter labor markets, higher minimum wages and better labor standards - can help low income workers build better lives for themselves and their children.

Focusing on child poverty, we see that in Massachusetts this too has continued to rise: more than 223,000 children— or 1 out of every 6—was living in poverty in 2013.4 Children exposed to many years of poverty are far more likely to be poor as adults.5 For that reason, the more kids and families who prosper today, the stronger and more prosperous their lives and our economy will be in the future. 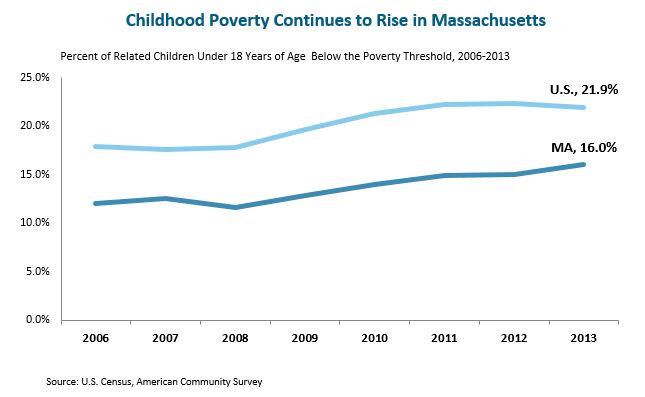 The official poverty measure – discussed above and shown in the accompanying chart, above - however, does not account for important elements of what it really takes for people to make ends meet. Recognizing the weaknesses of the traditional poverty measure, the Census Bureau has begun to calculate a second measure of poverty, the Supplemental Poverty Measure (SPM), which provides a more accurate estimate of families’ needs and finances. This alternate measure, for instance, factors in the higher cost of living in Massachusetts and accounts for public benefits received by low-income families, such as SNAP nutrition benefits (food stamps) and the Earned Income Tax Credit and Child Tax Credit. (For more on the difference between the Official and the Supplemental Poverty Measure, see Appendix A of this report.)

Examining poverty through the more refined lens of the Supplemental Poverty Measure, we see just how important these public benefits and tax credits are in reducing poverty, particularly among children. During the 2009 to 2012 period, these programs and credits together kept an average of 918,000 people in Massachusetts out of poverty each year (as measured by the SPM), 199,000 of whom were kids.6 This trend holds true across the nation: for the overall U.S. population, these programs lifted 46 million people, including 12 million kids, above the SPM poverty line, on average, each year.

Federal and state policies that target poverty, boost wages and labor standards, and expand opportunities for low and moderate income families can and do have a large, positive effect. These policies improve the lives of millions of people throughout the Commonwealth and help lay the groundwork for a stronger, more prosperous economic future for all Massachusetts residents.

5The National Center for Children in Poverty has a detailed report on Child Poverty and Intergenerational Mobility. Additional information on economic mobility is available at the Economic Policy Institute.