MassBudget's State of Working Massachusetts presents a snapshot of the current economic conditions facing workers in Massachusetts, along with some of the long-term trends affecting workers and their families.

A strong economy is one that works for everyone, including both young and experienced workers, children and families, lower-wage and high-wage earners. The economic security of these workers depends on reliable access to opportunities that offer good incomes and that allow them to share in the benefits of economic growth. With the right set of policies in place at the state and national levels, realizing this vision of broadly shared prosperity is well within our reach (read more about effective policy options for jump-starting wage growth).

While we have experienced decades of wage stagnation for far too many of our working people, there is some good news this year: from 2014 to 2015 wages rose across the income spectrum, both here in Massachusetts and nationally. During this past year, average wages for the broad middle class in Massachusetts rose almost 3 percent ($21.63 an hour to $22.25 an hour, adjusted for inflation). Though this is good growth, our lowest wage workers, who benefitted from the state minimum wage increase in 2014, saw even stronger progress, with an increase of over 7 percent over the past year ($9.08 an hour to $9.74 an hour, adjusted for inflation). This wage growth is aligned with other positive trends in our state, including steady job growth, and declines in unemployment and child poverty. And while this is a positive sign, this strong real growth was partly due to inflation being almost zero, so virtually all nominal wage growth shows up as real wage growth--and this uncharacteristically low inflation is a trend that is unlikely to continue.

We are beginning to see progress, but we still have a long way to go. Since the 1970s, wages have been close to stagnant for most workers (see chart, below). During the current economic recovery (since 2009), wages for low and middle wage workers are still lower than they were at the end of the recession. 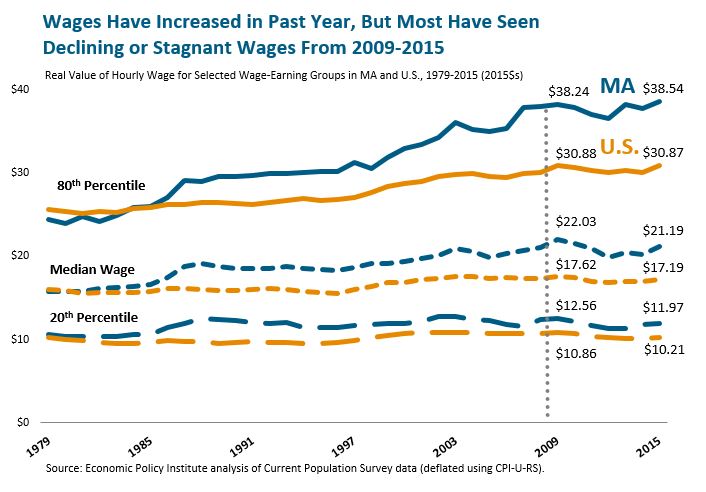 Due in significant part to policy choices adopted over the last several decades, wage stagnation is now woven into the structure of our national and state economies. But that has not always been the case. For three decades following WWII, real median wages in the U.S. grew at a healthy annual clip, raising living standards and expanding opportunity for millions of American working households. During these post-war years, wages grew in lock-step with gains in overall productivity: as workers delivered more and better products with each hour of their work, these productivity gains fueled corporate profits and led to higher hourly wages for workers (see chart, below). The powerful and beneficial connection between productivity growth and wage growth, however, was broken during the 1970s. Reconnecting these two—making sure that wages grow as productivity rises—has become one of, if not the, central economic challenge of our time. 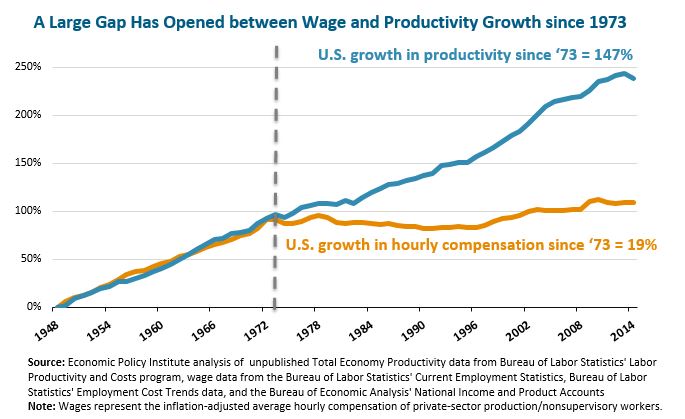 Massachusetts already has taken a modest but important step toward reconnecting wage growth to gains in productivity by adopting a state minimum wage of $11 an hour by 2017. When the minimum wage rose in our state from $8 to $9 an hour in 2015—wages grew significantly for the lowest income 10th percent of workers (7.3 percent) as compared to the more moderate rise the state’s middle class workers saw of 2.9 percent. This shows that commonsense policy changes can markedly lift workers’ wages. 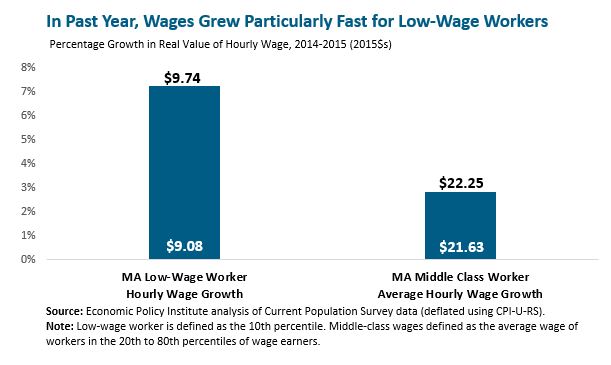 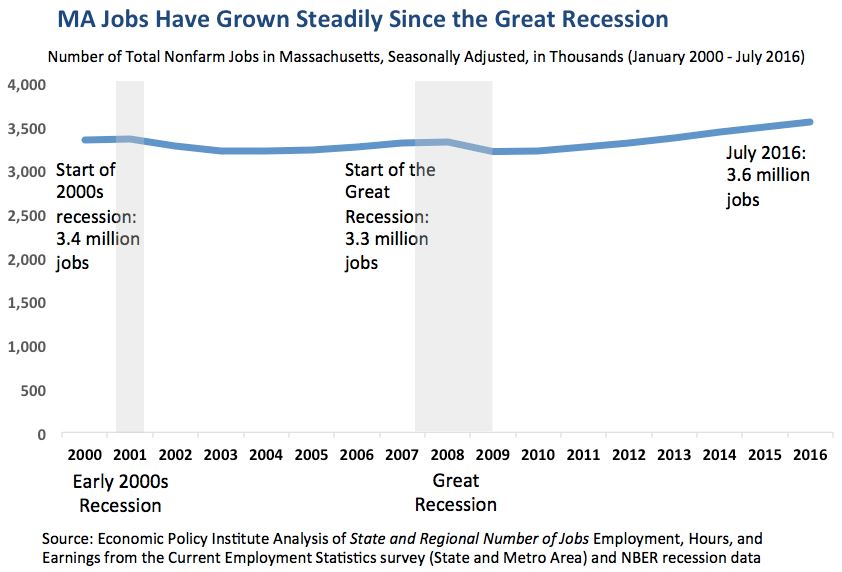 This recent strong job growth has still not reversed the decades of weak wage growth across the country and here in Massachusetts. There is much more that can be done to create an economy that delivers broadly shared prosperity. One of the effects of weak wage and income growth is that many working families cannot make meaningful headway toward raising their standards of living. For some low-income families this means they cannot work their way out of poverty.

Today, more than 1 out of every 9 people in Massachusetts lives below the federal poverty threshold (which is roughly $24,000/year for a family of four). A related and still more troubling outgrowth of stagnant wages and income is revealed by the U.S. Census data on childhood poverty in the Commonwealth. In Massachusetts, close to 200,000 children—or 1 out of every 7—were living in poverty in 2015. As a Commonwealth, we are stronger when we do not allow poverty and a lack of opportunity to stand in the way of people, particularly children, reaching their full potential. 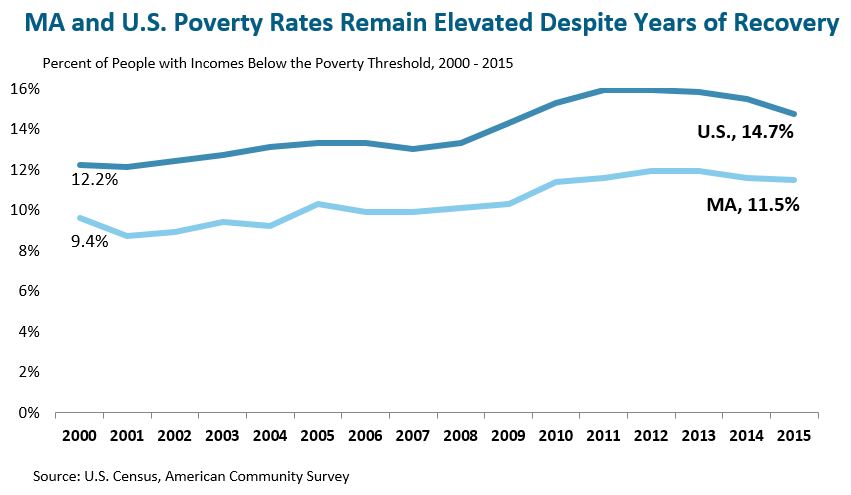 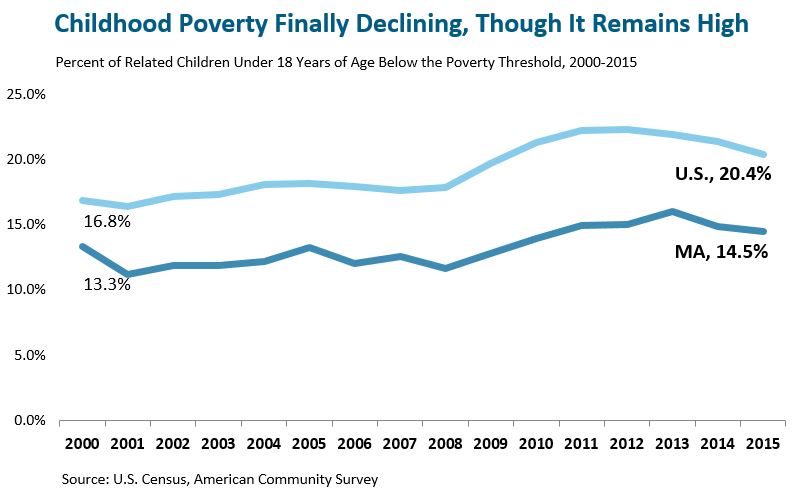 Many low-income people are working but simply cannot make ends meet; in 2014, over two-thirds (71.2 percent) of Massachusetts working-age adults living at or near poverty who do not have disabilities worked either full- or part-time (meaning they worked for at least some part of the year).2 For a variety of reasons, some of these part-time workers work very few hours, but about half of them worked at least 20 hours/week for more than half of the year. The share of people in poverty who are working is even higher among Black (75.8 percent) and Asian (78.3 percent) workers. 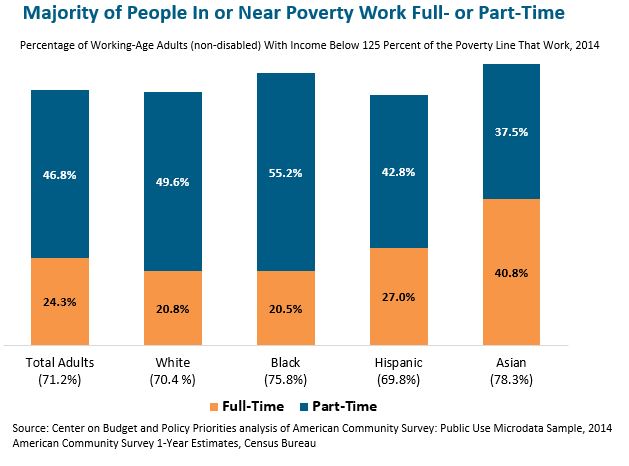 Despite the concerning national and state level trends in wages, incomes and poverty rates, Massachusetts families have some positive trends working in their favor. Massachusetts has the best educated workforce in the nation and the highest median wage (see chart below and the Education & the Economy section of this report). 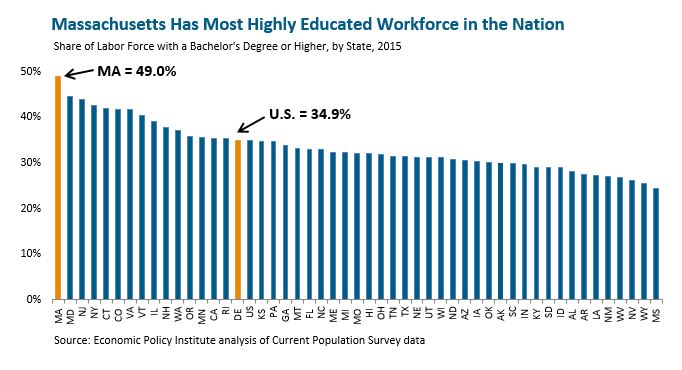 By 2017, Massachusetts also will have one of the highest statewide minimum wages in the nation (see the Wages & Income section) and has enacted a statewide earned paid sick time policy. These policies improve the pay and quality-of-life for hundreds of thousands of working people.

Building on these successes, there is much more that can be done—at both the state and federal levels—to help boost wages, reduce poverty, and improve economic security and opportunity for workers and their families. Policies such as Paid Family and Medical Leave, which can help working parents meet the challenges of balancing work and family obligations, provide tangible benefits to families. Education and job training can improve the productivity of our workforce and strengthen our economy. Efficient transportation systems and affordable child care can help people get to work and know that their children are well taken care of while they are at work. And wages can grow when national policies aim at full employment and when we set minimum wages that allow everyone who works hard to be able to pay for the basic necessities. With such policies in place, we can begin to reverse the damaging trends of the last three decades. In time, we can rebuild a strong economy, one marked not by wage stagnation and extreme inequality, but instead by broadly shared prosperity.

In addition to covering issues of wages and poverty, the various sections of The State of Working Massachusetts discuss the jobs situation in our state, the impact of wages on incomes, and the important role education plays in all of these areas. Throughout the report, we present data available from the U.S. Census Bureau, U.S. Department of Labor, U.S. Bureau of Economic Analysis, U.S. Bureau of Labor Statistics and others. We invite you to read more about all of these topics and to explore the many other issues we cover and reports we provide on the MassBudget website.

1The National Bureau of Economic Research, US Business Cycle Expansions and Contractions.