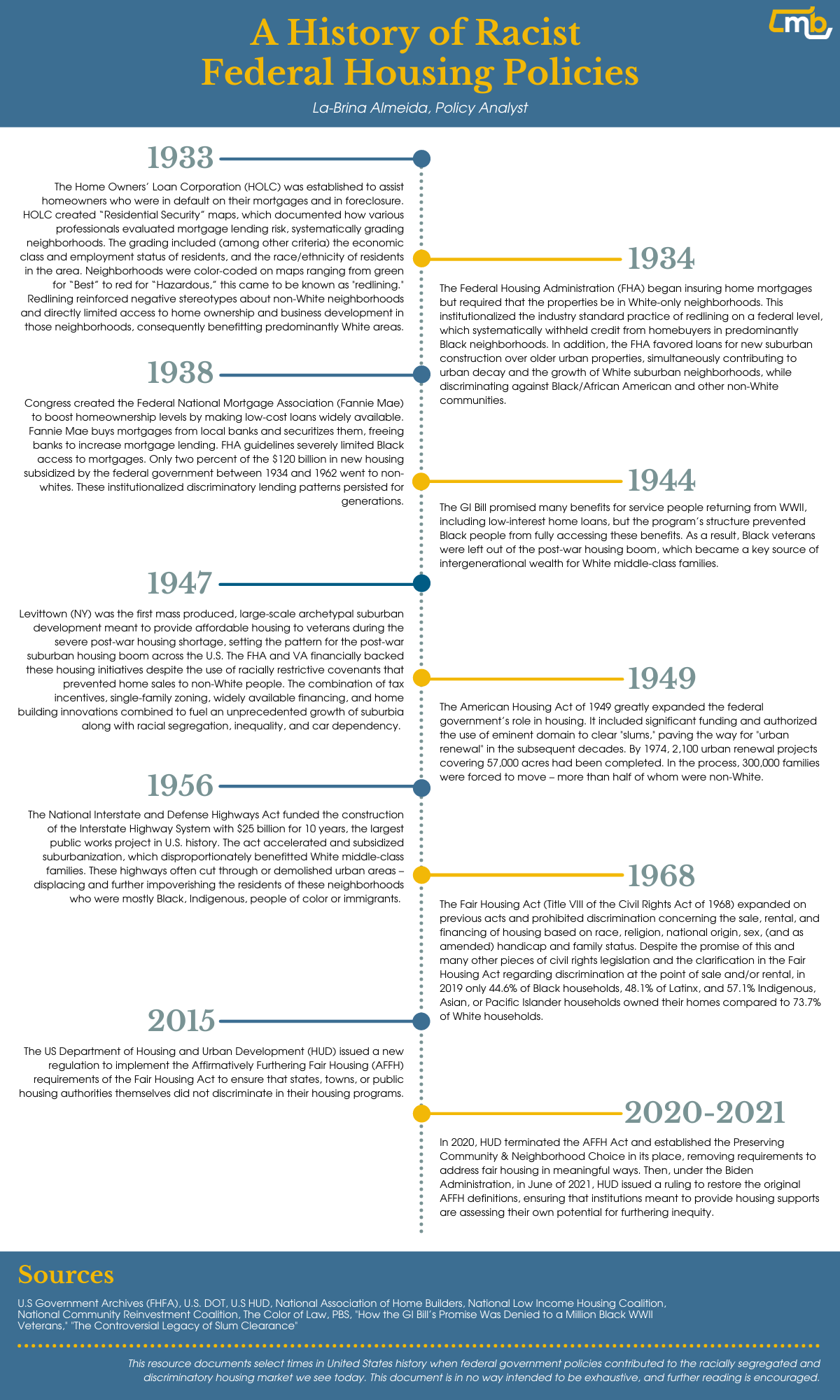 1933
The Home Owners’ Loan Corporation (HOLC) was established to assist homeowners who were in default on their mortgages and in foreclosure. HOLC created “Residential Security” maps, which documented how various professionals evaluated mortgage lending risk, systematically grading neighborhoods. The grading included (among other criteria) the economic class and employment status of residents, and the race/ethnicity of residents in the area. Neighborhoods were color-coded on maps ranging from green for “Best” to red for “Hazardous,” this came to be known as “redlining.” Redlining reinforced negative stereotypes about non-White neighborhoods and directly limited access to home ownership and business development in those neighborhoods, consequently benefitting predominantly White areas.

1934
The Federal Housing Administration (FHA) began insuring home mortgages but required that the properties be in White-only neighborhoods. This institutionalized the industry standard practice of redlining on a federal level, which systematically withheld credit from homebuyers in predominantly Black neighborhoods. In addition, the FHA favored loans for new suburban construction over older urban properties, simultaneously contributing to urban decay and the growth of White suburban neighborhoods, while discriminating against Black/African American and other non-White communities.

1944
The GI Bill promised many benefits for service people returning from World War II, including low-interest home loans, but the program’s structure prevented Black people from fully accessing these benefits. As a result, Black veterans were left out of the post-war housing boom, which became a key source of intergenerational wealth for White middle-class families.

1947
Levittown (NY) was the first mass produced, large-scale archetypal suburban development meant to provide affordable housing to veterans during the severe post-war housing shortage, setting the pattern for the post-war suburban housing boom across the U.S. The FHA and VA financially backed these housing initiatives despite the use of racially restrictive covenants that prevented home sales to non-White people. The combination of tax incentives, single-family zoning, widely available financing, and home building innovations combined to fuel an unprecedented growth of suburbia along with racial segregation, inequality, and car dependency.

1949
The American Housing Act of 1949 greatly expanded the federal government’s role in housing. It included significant funding and authorized the use of eminent domain to clear slums, paving the way for urban renewal in the subsequent decades. By 1974, 2,100 urban renewal projects covering 57,000 acres had been completed. In the process, 300,000 families were forced to move – more than half of whom were non-White.

1956
The National Interstate and Defense Highways Act funded the construction of the Interstate Highway System with $25 billion for 10 years, the largest public works project in U.S. history. The act accelerated and subsidized suburbanization, which disproportionately benefitted White middle-class families. These highways often cut through or demolished urban areas – displacing and further impoverishing the residents of these neighborhoods who were mostly Black, Indigenous, people of color or immigrants.

1968
The Fair Housing Act (Title VIII of the Civil Rights Act of 1968) expanded on previous acts and prohibited discrimination concerning the sale, rental, and financing of housing based on race, religion, national origin, sex, (and as amended) handicap and family status. Despite the promise of this and many other pieces of civil rights legislation and the clarification in the Fair Housing Act regarding discrimination at the point of sale and/or rental, in 2019 only 44.6% of Black households, 48.1% of Latinx, and 57.1% Indigenous, Asian, or Pacific Islander households owned their homes compared to 73.7% of White households.

2015
The U.S. Department of Housing and Urban Development (HUD) issued a new regulation to implement the Affirmatively Furthering Fair Housing (AFFH) requirements of the Fair Housing Act to ensure that states, towns, or public housing authorities themselves did not discriminate in their housing programs.

2020-2021
In 2020, HUD terminated the AFFH Act and established the Preserving Community & Neighborhood Choice in its place, removing requirements to address fair housing in meaningful ways. Then, under the Biden Administration, in June of 2021, HUD issued a ruling to restore the original AFFH definitions, ensuring that institutions meant to provide housing supports are assessing their own potential for furthering inequity.

This resource documents select times in United States history when federal government policies contributed to the racially segregated and discriminatory housing market we see today. This document is in no way intended to be exhaustive, and further reading is encouraged.