This report, part of our Does It Make Sense to Collect Bus Fares? series, focuses on the equity implications. Since bus riders are more likely to have lower incomes and be people of color, fares are a way of collecting public revenue that increases inequality. Transit fares greatly impact travel choices for the lowest-income riders and fare enforcement has often been racially biased.

Transit fares are regressive, meaning that they claim a larger share of income from people with low- and middle-incomes than from higher-income people. While several other kinds of taxes and public fees fall disproportionately on lower-income households in Massachusetts, perhaps none falls more unequally than transit fares. Eliminating transit fares is therefore an especially potent way to advance income equality with relatively few dollars. 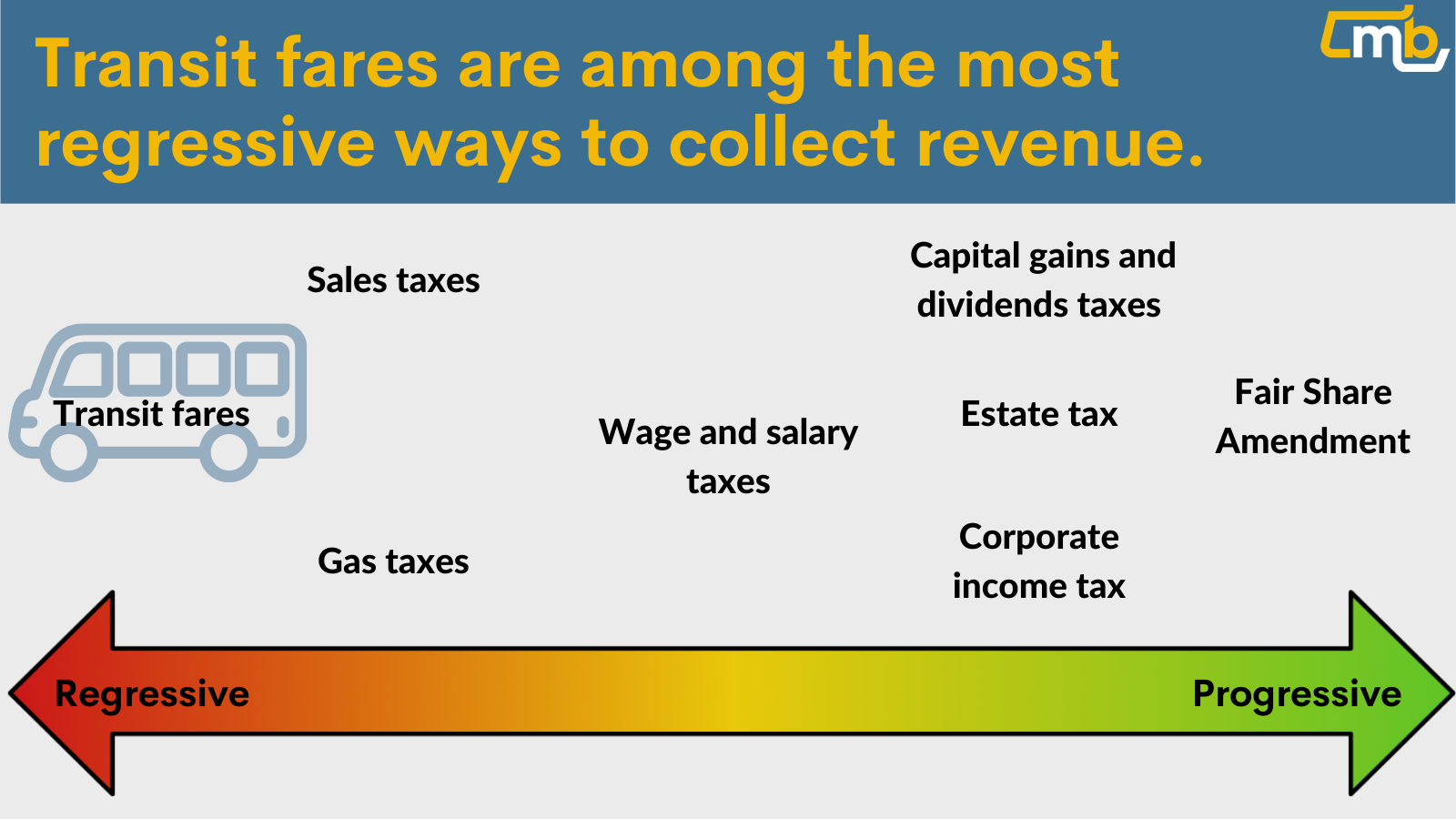 Demographics of transit and bus riders

Normally the MBTA’s system of subways and light rail carries more riders in a normal year than the bus system. During the coronavirus pandemic, bus ridership has exceeded rail ridership, demonstrating how crucial buses are for essential workers and others who don’t have other ways to travel.

Nationwide, people who rely on public transit tend to have lower incomes than the general population and are more likely to be Black or Latinx.  Barriers to opportunity and an ongoing legacy of structural racism have made it harder for people of color to build wealth, to live near work, and to have a variety of travel choices. Racial covenants in the suburbs, redlining and housing discrimination, have tended to keep people confined to certain city neighborhoods or have pushed families of color toward areas further away from job centers. High property values, gentrification, and residential segregation often leave people of color living in places where they may be far from employment and other opportunities but have little access to transit, especially rail.

Automobile ownership is also expensive. In Massachusetts the costs of insurance, financing, taxes, repairs, parking, and fuel add up to $12,000 or more each year.

The median household income of riders on the MBTA is about $75,000 per year, according to a survey by the transit authority conducted between 2015-2017.[1] According to MBTA calculations, this was more or less the median income for households across the service area.[2] Of the transit users who reported their incomes in this survey, two-thirds of bus riders reported household incomes below that level. Across the whole MBTA system, 29 percent of riders indicated an income of less than 60 percent of that area median ($43,5000), whereas among bus riders, 42 percent said their income was below this level.

Compared to the MBTA, riders on the 15 Regional Transit Authorities’ (RTAs) bus routes tend to have even lower incomes, be less white, and dependent on public transit for travel. For example:

Fare costs significantly impact the travel choices of low-income riders. A recent experiment at the MBTA led by researchers at the Massachusetts Institute of Technology (MIT) makes this clear. The study recruited low-income transit riders who receive Supplemental Nutritional Assistance Program (SNAP) benefits. Half were given fare cards that enabled a 50 percent discount on trips, and the other half were given a normal fare card during the month-long study period (and a discounted card during the subsequent month). The group receiving the discount took 27 percent more trips during the month than those without a discount.

The study also found that low-income riders tended to take proportionally more off-peak trips. In other words, when fare cuts enabled them to ride more, they were less likely than other riders to travel during rush hour, when vehicles were already crowded.  Instead, they were more likely to travel at times when vehicles were relatively underutilized, which actually improves the overall efficiency of the system.

Enforcement actions against riders who don’t pay transit fares has fallen disproportionately on people of color. Across the nation, fare enforcement by police has sometimes had tragic consequences, placing people in the criminal-legal system or in the worst cases leading to loss of life.[3]

Recent policy changes will help address some of these problems, though the MBTA plans new onboard fare inspection that will provide new challenges. In particular, immigrants without full legal status may be particularly fearful of random checks that ask those who cannot verify fare payment to provide identification.

A majority of citations that Transit Police give on the MBTA are to riders of color, even though a majority of riders are white. An information request to the MBTA also revealed that in 2018 three-quarters of arrests for fare evasion were people of color.[4]

A transportation bond act enacted in January 2021 included reforms that greatly reduce fines and eliminate arrests for fare evasion. The MBTA has said that it will begin releasing an annual report on fare citations that will break citations down by race. The state still needs to approve the final regulations on the MBTA’s new fare citation policy.

As part of the MBTA’s current plans for fare collection, new civilian personnel will circulate through the MBTA system checking whether passengers have a pass or can verify that they paid the fare. Along with added costs, it will pose new challenges to ensure that racial bias does not affect the location and choice of passengers subject to verification. The effort will require ongoing vigilance that would not be required if fares were eliminated.

The MBTA already has free buses… for some of its richest, whitest riders 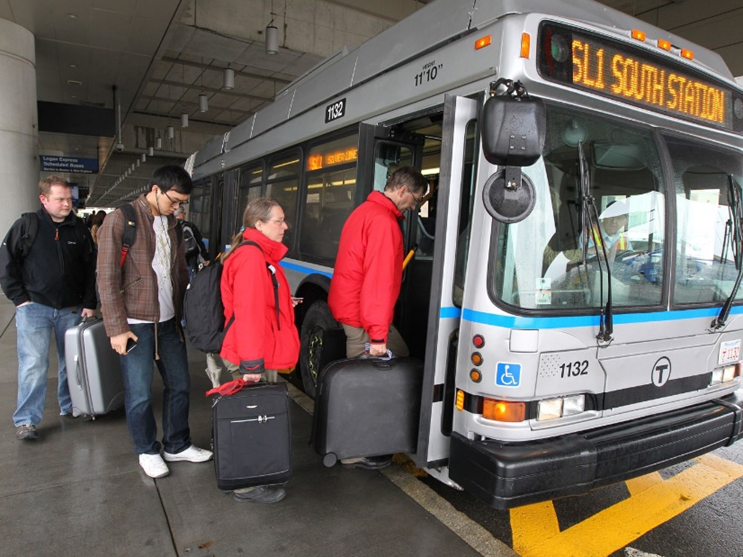 Since June 2012, the MBTA has provided free bus service to riders accessing the system at Logan Airport. In an arrangement reimbursed by the state authority Massport, Silver Line buses do not collect fares at the airport.[5] There are on average approximately 2,800 riders who board the bus each weekday at Logan. According to the MBTA, eliminating fare collection measurably reduced the amount of time the buses spent at each stop. Most surveyed riders said that without the bus service they would have taken a taxi.

There are some practical reasons to provide free service at these bus stops above others. Out of town travelers are more likely to fumble over unfamiliar MBTA fares and to comply with the federal Clean Air Act, Massport reimburses the transit agency for the fares.

But as a matter of equity, travelers boarding the MBTA at Logan are some of the least likely to be burdened by the cost. Only one out of seven riders on the Silver Line segment that serves the airport earns a low income, as the MBTA defines it (below $43,500 for a household), compared to almost half of all bus riders in the system overall. In other words, the MBTA charges fares to bus riders who are three times more likely to be low-income than those who ride for free from the airport.

Massport’s 2019 survey of passengers accessing ground transport paints a similar picture: “over two thirds (68 percent) of the respondents who answered the income question on the survey indicated an annual household income of $90,000 or more, and over half (54 percent) have an annual household income of $120,000 or more. This result is consistent with the fact that air travelers are generally observed to have higher-than-average incomes.” Over a quarter (26 percent) of passengers have household incomes over $200,000.[6]

Similarly, 76 percent of riders on the Silver Line that serves Logan Airport are white.

Other papers in this series explaining key considerations about eliminating bus fares:

[3] In Los Angeles, César Rodríguez was subjected to police enforcement for fare evasion that led to him being crushed by a train. Deion Fludd, a New York teen who jumped a turnstile later died from injuries claimed to be caused by the police.

[4] MBTA police issue over 2,000 citations each year. The MBTA does not publish the racial breakdown of citations for fare evasion, but in response to a Boston Globe public records request, the MBTA disclosed that in October through November of 2019, only one third of citations were given to white riders. Separately, the Conservation Law Foundation and Lawyers Committee for Civil Rights received an information request showing that a majority of citations in January 2019 were given to people of color. Actual arrests – as opposed to just citations – for fare evasion are even more disproportionate: almost three-quarters were people of color in 2018. A San Francisco area police study similarly found nearly half of all citations were made to Black riders, with only 18 percent of citations going to whites. A survey by TransitCenter likewise found disproportionate impacts in studies of fare enforcement in Washington DC, New York City, Portland, Minneapolis, Seattle, Los Angeles, and Cleveland.

[5] Reportedly, the MBTA was not required to conduct an equity analysis for the change in fare practices because fares are still being paid, just by Massport.

[6] There are also many regular workers at Logan Airport that may have low incomes. For instance, many may be cleaners or fast-food restaurant workers. However, workers at Logan who commute by the Silver Line might not actually benefit from the free Logan boardings. Since they still have to pay to come to Logan and may need to pay for subsequent legs of their commute from work, it may be more practical for them to just buy a systemwide transit pass or bus pass.

The tax on inherited estates is Massachusetts’ only tax that directly reduces wealth inequality. Although the pandemic has highlighted disparities between rich and poor families, the Governor and some in the Legislature have proposed changes to the estate tax that would largely benefit the state’s wealthiest households.